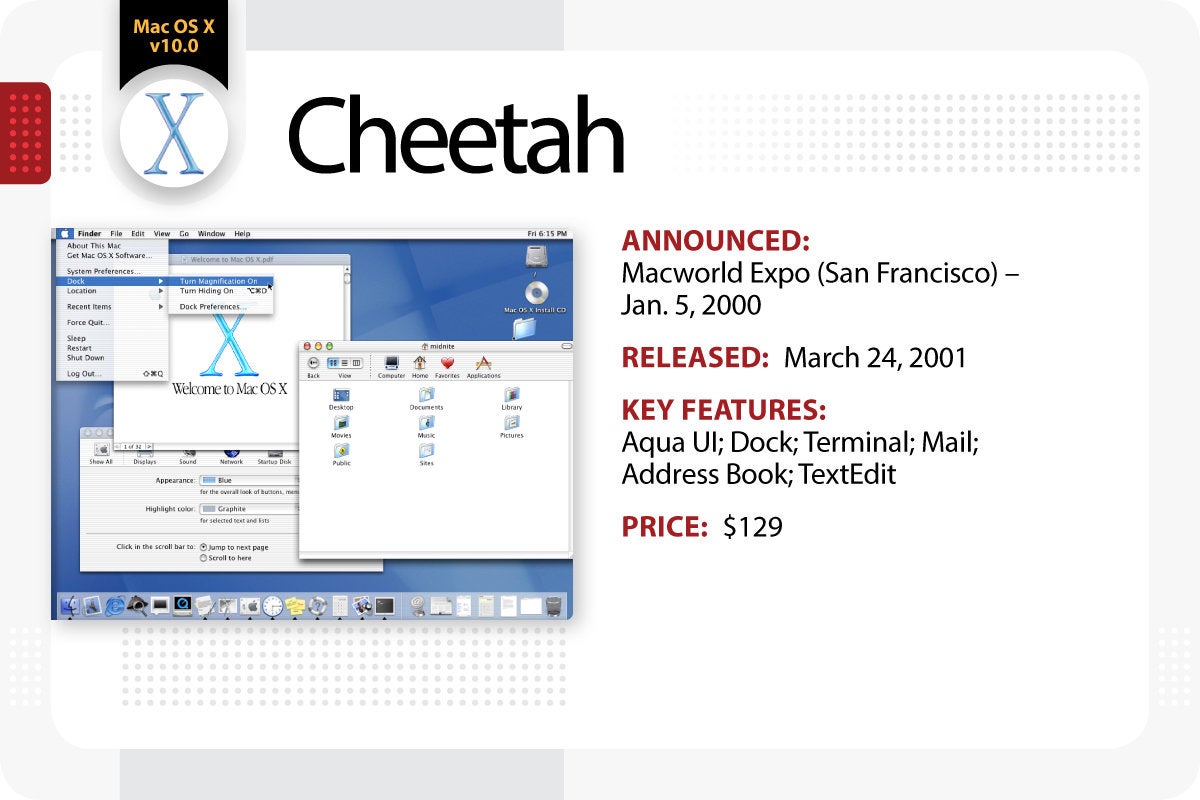 
It was 20 years ago today that APple chief Steve Jobs taught the Mac to play the NeXT way as Apple introduced the first iteration of Mac OS X Cheetah at a global launch event with parties and gatherings of the faithful across the planet.

The OS X (now macOS) act youve known for all these years became the UNIX-based launchpad for iPod, iPad, and iPhone and was arguably as important in restoring the company to health as the iMac that returned the company to style.

Introduced globally on March 24, 2001, the OS was desperately needed. Apple had spent millions attempting to create a new system to replace Mac OS Pink, Taligent, Copland, and Gershwin all came into view.

With a dying Mac market, Apple publications at that time filled themselves with in-depth and sometimes learned tracts detailing all that was known of Copland, Taligent and friends, and the subsequent plans to use OpenStep. These reports had charts and everything.

Its just that what Apple was delivering didnt make the grade. driving Apple to seek salvation outside the company. Following a brief flirtation with BeOS, Apple acquired NeXT to obtain that companys object-oriented OpenStep OS.

Jobs, Apples legendary founder, also returned to the company under the deal. He eventually replaced CEO Gil Amelio and the rest is history. Jobs has left us, but youll still find his NeXT inheritance in macOS Big Sur in those NS-prefixed items inside the OS: NS = NextStep, you see.

And it was all available through that human-friendly graphics-rich Aqua user interface.

Following a beta testing process beginning at WWDC 2000, launch day rolled around as speculation and interest in the OS hit an absolute peak.The huge popularity of the iMac and iBook meant millions of new users had joined the congregation of a company many recall Michael Dell had fatefully advised be sold and the money returned to shareholders.

History shows how wrong he was.

I was at the London launch event, held at a computer retailer in Central London.The OS wasnt free in those days millions of Mac users stood ready to spend $129 (or the local equivalent) for the chance to install Mac OS X. It had been available in Public Beta since September 2000, but this was still a really big deal for Mac users and the wider PC industry.

Apples market share at that time was tiny, and shrinking.Today it accounts for 23% of enterprise PC sales, with iPhones and iPads in even wider circulation.

People sensed how important the release might be. I can recall meeting one loyal Apple fan attending the launch event in London. He was hammering at the wrong door on Londons Tottenham Court Road, yelling, “I need it! Let me in! I have to have it!”

His sentiments were shared by hundreds of Macintosh-users who found the correct location for the launch.

“I had to be here. It’s an historic moment. I eat, breathe and sleep Mac.”

As big as the Macintosh

The event was packed. “We expected 100 or so people,” said a security guard at the door of the shop. “We’ve seen 400 to 500 visitors during the night,” he confirmed.

This could be as big as 1984 when the original Macintosh was launched, perhaps even bigger, Michael Ebanks of Splash New Media told me at the time.

The throng stared in rapt silence at video screens at the event as Apple’s Stuart Harris took them on a point-by-point tour of OS X. That single store sold over 500 copies of the OS within 24 hours. UK Mac users scooped up almost every available copy of the OS that weekend.

This excitement was repeated globally Apple Australia even baked a cake decorated to look just like an OS X box with its Aqua-inspired design.

(It wasnt an easy a start. Early iterations missed essential tools, performance was a little sluggish and kernel panics frequent, but Apple continued to improve its OS.)

What we didnt know was that Apple was already secretly running its new operating system on Intel processors. It announced its migration to Intel processors in 2005 and last year began the journey to take its NeXT-based OS across to its industry-leading M-series Apple Silicon chips.

“In a short amount of time, we have seen incredible growth in our developer community and the number of Mac OS X applications now tops 1,000. Every major Mac software company sees a huge opportunity and is bringing applications to Mac OS X, while new developers are helping broaden the applications available to Mac users around the world.”

Twenty years later, Mac OS X has become macOS 11. The Mac is migrating to Apple silicon. The first M-powered iMac is coming to show us the future of desktop computing.And many of us expect one day to drive cars in part built on the some of the same OS foundations.

Its easy to consider OS X as one of Apples better investments. Bidet, mate: Save $140 on this easy-to-install smart toilet seat with heated water