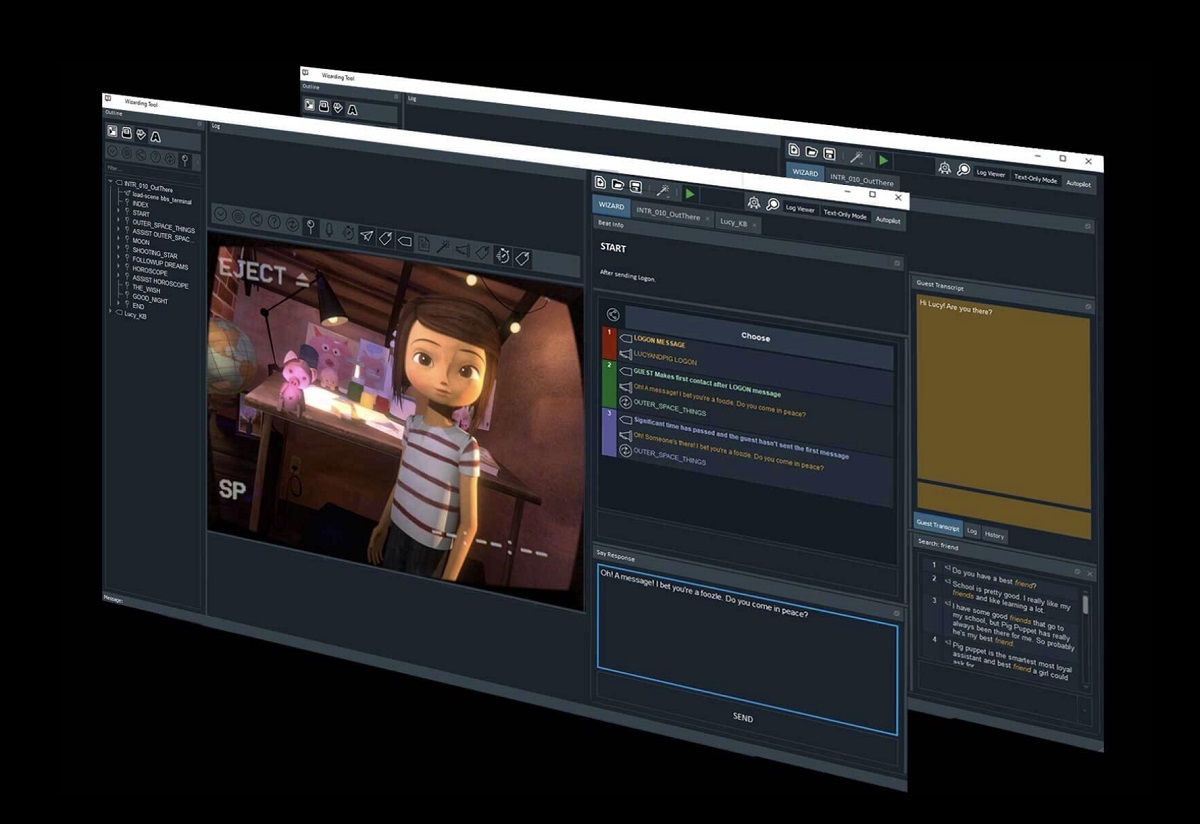 
Fable Studio is opening its virtual beings Wizard Engine to collaborators in fashion and nursing. The San Francisco company built the engine to manage its virtual character Lucy, an 8-year-old animated girl from the Wolves in the Walls virtual reality experience.

Lately, Lucy has made appearances at the Sundance Film Festival and SXSW as a virtual character. She sang songs and talked with the audience, using her AI-based personality, on Twitch. The Wizard Engine enables Fable to manage Lucys appearances on different social media platforms.

Were announcing that were opening up the Wizard Engine for people to use themselves, Saatchi said. Were going to open it up for signups. Youll be able to create the AI characters, distribute them on Twitch, Instagram, and YouTube. We use it to create these monthly beats in Lucys life.

The Wizard Engine is the tool that Fable uses to bring to life to its virtual beings. It works on three things: generation, distribution, and memory.

The tool lets Fable take a virtual being as conceived the bible and backstory of their life, a synopsis of what will happen to them and uses that to generate on an ongoing basis the content of their life. It generates the voice, animation, text dialogue, and video. These things would realistically make up the virtual beings life (what their knowledge base about their past is, what happened yesterday, whats happening right now, what are they looking forward to etc).

One of the tools the Wizard Engine uses is OpenAIs GPT3 technology to generate Lucys responses.

And the engine gives your virtual being memories. It allows Fable and collaborators to build virtual beings with memory so that the beings can remember their own lives, what they are learning about their friends, and combine those to create empathetic moments where users feel seen.

You could almost think of the Wizard Engine as an AI game engine, he said. It allows collaborators to generate and deploy interactive experiences with virtual beings to delight millions of users. So far the interactive/gaming and deep learning worlds have remained very separate, but virtual beings will only exist if they can work together.

By opening up the opportunity to work with the Wizard Engine to a small number of collaborators, Fable hopes to show that the intersection of AI and interactivity can be a powerful one.

A focus on fashion and health care

To date, nonplayer interactive characters have been centralized usually in a videogame. With the Wizard Engine, Fable is decentralizing nonplayer characters and virtual beings.

We need virtual beings to be seen in lots of places. Thats why we had Lucy on Twitch at SXSW. Right now, NPCs exist only in games. But they can be on other platforms, Saatchi said.

Collaborators will be able to work with Fable to create a virtual being in one of these two spaces fashion and health care, creating a backstory, life, and aesthetic for the character. The creators will be able to plan what will happen to the character over the course of their first year, how theyll interact with friends. Collaborators can monetize through the careers of the virtual beings they create with Fable.

For a fashion virtual being, imagine a young man leaving design school and while working in physical fashion by day working on nights and weekends to build digital fashion items that can be sold as nonfungible tokens (NFTs).

Were building the Wizard Engine with that decentralized future in mind, and the character might spend some time as an NPC in a game or texting or chatting or broadcasting on Twitch, Saatchi said.

But making money isnt the only purpose here.

This is less about making money and more about finding early collaborators in fields of fashion and health, Saatchi said. There might be great ideas for virtual beings in that space. I think these digital characters pretty quickly start to have digital work products that could be purchased.

Separately, a nurse who struggles with compassion fatigue with friends and relatives can, after a long day of work, unwind by playing games with friends and hanging out in virtual concerts with friends. That nurse could perform some simple healthcare checks online and make money doing it as a virtual character.

At SXSW last week, Lucy played her first virtual concert on Twitch to show off the Wizard engine. She interacted with viewers, most of whom have been friends with Lucy for months. She sang three songs: Toys, My Friends, and Nanas song. The lyrics unlocked parts of her story for users who text and call with her. And now Lucy will beable to talk to friends about the concert and remember it when they talk.

We are really interested in the idea of just telling a story with intimacy and connection, Saatchi said. We want the Wizard Engine to be something that can empower them.

Where Is the Music Folder on a Mac?