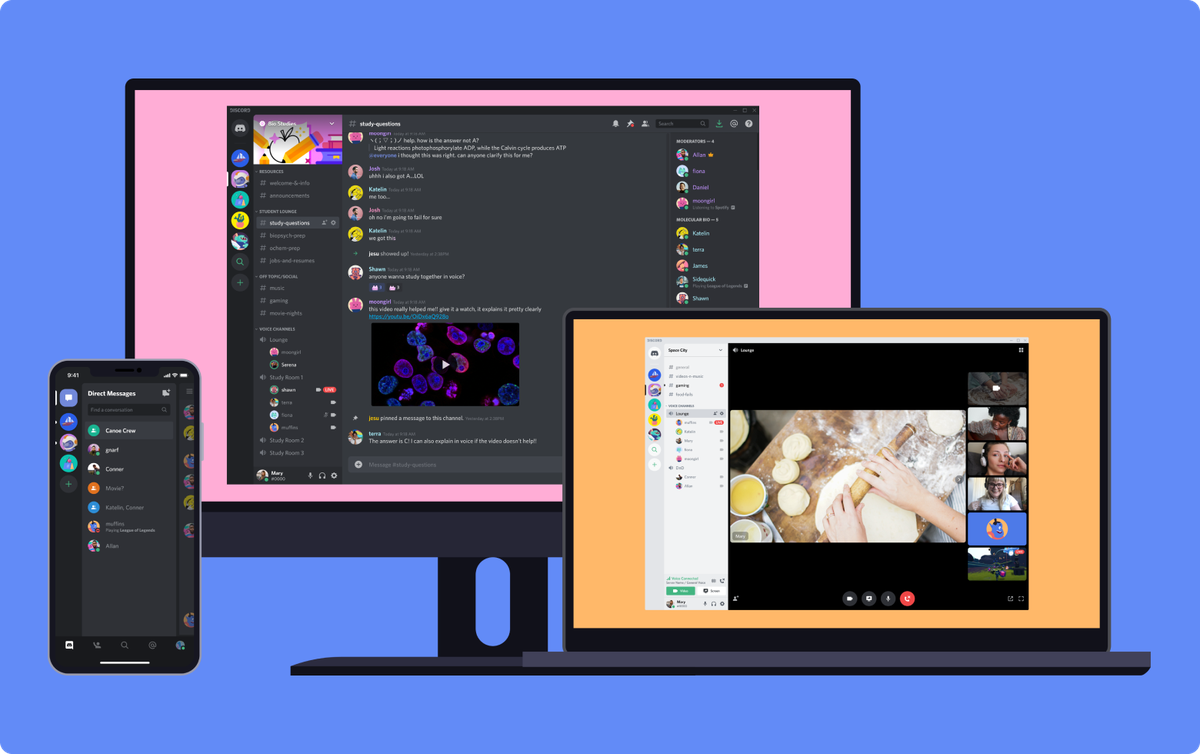 
Microsoft is reportedly having discussions with Discord to buy the communications app. The Wall Street Journal reports that Microsoft is in exclusive talks to acquire Discord, and a deal could close next month. Its the latest acquisition target for Microsoft, after the company failed to acquire TikTok and Pinterest recently. While all three are very different services, they share one common element: community.

Microsoft is willing to spend big on these services because, outside of Xbox, it doesnt have a huge consumer-facing community like rivals Google, Amazon, Facebook, and Apple do. Microsoft has watched Google acquire YouTube and turn it into the worlds biggest video platform, Amazon buy Twitch and dominate streaming, Facebook acquire both Instagram and WhatsApp to control the way millions communicate and socialize online, and Apple rule mobile with its App Store.

Discord gives Microsoft access to a growing list of more than 140 million monthly active users that includes thousands of top YouTubers, creators, and gamers. Microsoft wants its own community.

Creation, creation, creation the next 10 years is going to be as much about creation as it is about consumption and about the community around it, so its not creating alone, said Microsoft CEO Satya Nadella in an interview with Bloomberg last month. If the last 10 years has been about consumption were shopping more, were browsing more, were binge watching more there is creation behind every one of those.

Nadella was quick to focus on creators and communities in the first year of being CEO at Microsoft. One of his first big acquisitions was Mojang, the studio behind Minecraft with its millions of devoted fans. Nadella has also spent big to acquire other communities, with LinkedIn costing $26.2 billion and GitHub for $7.5 billion. GitHub was a key target to buy developer love and a huge community, and LinkedIn connected Microsoft more deeply to businesses and provided access to a significant professional social graph.

Microsoft has clearly been on the hunt for the same type of creator-led community on the consumer side, but TikTok and Pinterest didnt work out. The software maker has also failed elsewhere. Microsoft acquired Beam a couple of years after Nadella was named CEO, and eventually rebranded it into its Mixer streaming service. Microsoft tried to compete with Twitch but ultimately failed because it didnt have the broad consumer reach. Instead, it shut down Mixer last year and helped transition streamers over to Facebook Gaming.

Discord offers Microsoft a big and engaged community. Primarily used by gamers, it has become a Gen Z hub for socializing with friends, particularly during the pandemic. It consists predominantly of private communities, and Discord has 6.7 million active servers every single day. Its a huge community, 75 percent of which are Discord users outside of North America.

Its also become an essential tool for many over the past year. Ive personally used Discord daily to keep in touch with friends, or participated in remote movie nights, streamed games, and just used the app as a place to hangout. Millions use Fortnite to hangout and play together, and Discord is the primary way these communities of friends talk and chat while theyre gaming.

Discord is a great mix of Slack messaging and Zoom video, combined together with a unique ability to just drop into audio calls freely. You dont have to organize a time to call friends, or send them links, you just all jump in and out of voice channels that are always ready and open.

The community and creator aspects for Microsofts potential Discord acquisition are clear, but the company is also driven by its desire to have big public services running on Azure. Its an area where Microsoft has fallen behind rival Amazon Web Services (AWS), and its particularly relevant when you consider Discord is powered by Google Cloud. Microsoft and Google are at each others throats again, so Microsoft migrating Discord over to Azure would be seen as a big win for its cloud ambitions.

Microsoft has also transitioned Minecraft from AWS over to Azure recently, and the company quickly moved Outlook for iOS (part of its Acompli acquisition) away from AWS years ago. Having a big platform like Discord, TikTok, or Pinterest running on Azure allows Microsofts huge sales force to sell more businesses on making the switch.

Discord also has growth potential for Microsoft beyond the cloud. Discord raised $100 million last year to try to move beyond just gaming and attract art communities, sports networks, school clubs, and lots more. This all sounds very similar to what Microsoft is trying to do with Microsoft Teams for personal use, after the company struggled to have its own Zoom moment with Skype.

Discord does open up Microsoft to moderation headaches, though. Discord created a task force to combat hate speech on the service last year, alongside improving its own racial equality efforts. Like many social networks, it has had to combat toxic users, bots, and groups that use the service for hacking, organized hate, and other nefarious activities. Discord does benefit from the fact it doesnt try to amplify content to keep users engaged like Twitter, Facebook, or YouTube. Microsoft has a lot of solid experience dealing with moderation with its Xbox Live network, and the company has been on a mission to combat toxicity in gaming in recent years.

If Microsoft is successful in its acquisition attempt, the crossovers between Discord and Xbox are obvious. Xbox chief Phil Spencer has previously discussed the importance of Discord as a place where people come together to talk about games, watch games, watch others play games. That should have been Mixer, but the user base wasnt there. A Discord acquisition could tighten the integration between Xbox, PC, and Discord, at a moment when consoles are basically turning into powerful PCs.

Spencer has been open to cross-talk between Xbox Party Chat and Discord for years, and its reasonable to assume it would be a priority for Microsoft to bring Discord to Xbox if a deal goes ahead. This type of integration would only make Xbox more appealing than PlayStation, just as Microsofts $7.5 billion Bethesda acquisition is designed to boost Xbox Game Pass with exclusive games.

Beyond that, I think Microsoft has learned to let its successful acquisitions flourish independently. Skype is a solid example of what goes wrong when Microsoft attempts to integrate a complicated service into its vast network of software and services, but GitHub, LinkedIn, and Mojang have all stayed largely independent. Microsoft wants Discord because of its active user base; the last thing it needs to do is anger a community of millions. This Retro Gaming Console Is a Time Machine to the ’80s