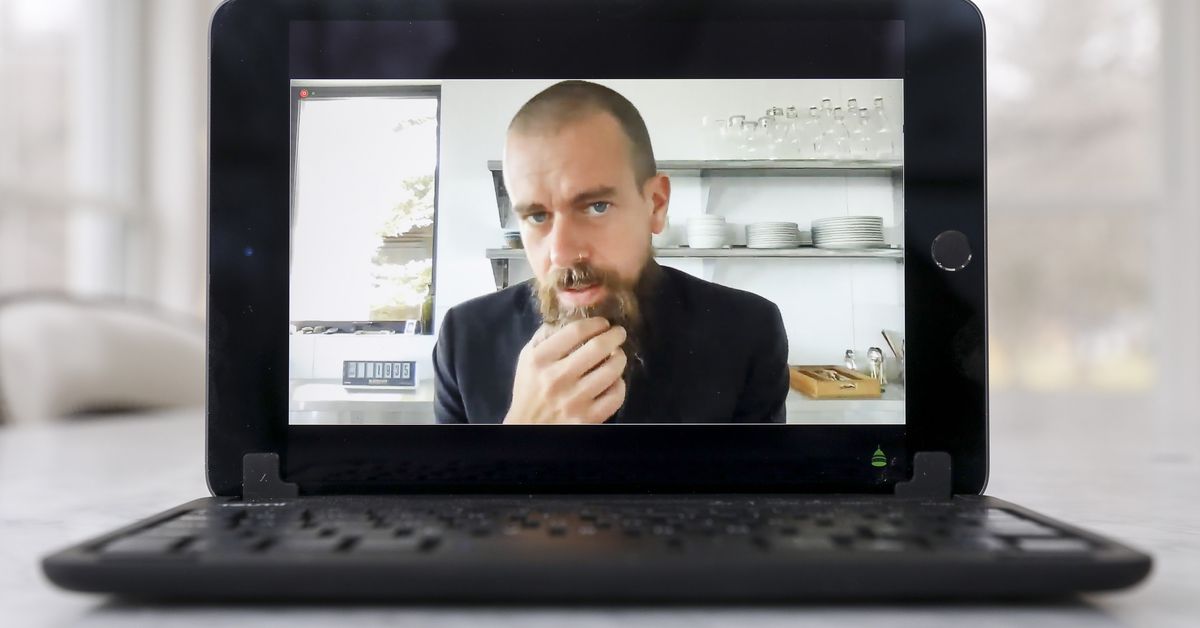 
In the middle of Congress first hearing of the year with the chief executives of Facebook, Google, and Twitter on Thursday, Twitter CEO Jack Dorsey tweeted out a poll. It was just a question mark with two answers: yes and no.

It was an obvious troll directed at the lawmakers questioning Dorsey, Facebook CEO Mark Zuckerberg, and Google CEO Sundar Pichai over the roles their platforms have played in spreading misinformation and inciting a violent insurrection at the US Capitol earlier this year. With limited time for questioning, the members would interrupt the CEOs responses, asking for yes or no answers or nothing at all.

But while the hearing was focused on finding solutions for some of the most serious free speech conflicts in history, Dorseys tweet symbolized just how seriously everyone was taking it not very seriously at all.

Its not the first time Zuckerberg, Dorsey, and Pichai have testified before Congress. But it was the first time they were hauled in after a pro-Trump mob attacked the Capitol on January 6th, killing multiple people. QAnon followers and right-wing online influencers were just some of the individuals who participated in the attack which was largely organized and live-streamed on social media.

Ahead of the hearing, Rep. Frank Pallone (D-NJ) told Politico, This is not a hearing just to hear the same old thing. He continued, We want to know what we can do legislatively. We want to pass laws.

But even after a direct affront to democracy, lawmakers were unorganized, making comments about cancel culture, Mr. Potato Head, and conflating competition, privacy, and moderation into a huge unsolvable problem.

But after the hearing, it doesnt seem as if the House has moved any closer to drafting real legislative reforms. In other words, Congress has failed to move past airing their personal grievances and toward providing real solutions.

In some cases, lawmakers were asking the tech executives to do more than theyre able to achieve themselves. Rep. Doris Matsui (D-CA) pushed the executives on the rise of anti-Asian violence and hate speech. But as rightly pointed out by my boss Nilay Patel on Twitter, the US doesnt have any hate speech policies and it would be difficult to get any related bill passed.

Bills have prompted tech companies to take action themselves

In the past, bills have prompted tech companies to take action themselves. After the 2016 presidential election, Sens. Amy Klobuchar (D-MN) and Mark Warner (D-VA) introduced the Honest Ads Act. The bill was never passed, but it pressured Facebook and Google to host their own transparent ads databases. But when it comes to content moderation and Section 230 reform, Facebook, Google, and Twitter are largely opposed to any significant changes to the law. Any meaningful reform will need to come from Congress.

Shortly after the January 6th attack, Warner, Klobuchar, and Sen. Mazie Hirono (D-HI) introduced the SAFE TECH Act, which would open new pathways for users to sue tech companies if content posted on their platforms threatens them personally with harassment, discrimination, or other forms of abuse. The Eshoo bill would remove immunity under Section 230 when a platforms algorithm is proved to have promoted or recommended content related to terrorist acts or civil rights violations.

Still, neither of those bills have received a hearing or much bipartisan support. In the Senate, Sen. Chris Coons (D-DE) will be chairing the Judiciary Committees subcommittee on privacy and technology. In an interview with Politico earlier this month, Coons said that, in some cases, Congress doing nothing is a better option.

But when do hearings fail to force the change Congress says it wants?

In an area where technology is moving fairly quickly, sometimes oversight hearings, letters [and] conversations with the leaders of major social media companies can result in those companies demonstrably changing their practices faster than we can legislate, Coons told Politico.

But when do hearings fail to force the change Congress says it wants? On Thursday, it seemed like we were quickly approaching that threshold. From Zuckerberg and Pichai, little new information was uncovered. Dorsey favorited tweets and sent out silly polls.

Coons told Politico that his Senate Judiciary panel plans on hauling these executives back for another hearing sometime in the future. But its not clear when that will happen. Most action on tech reform is likely to come from the House Judiciary Committee. Last week, that committee finished up its final antitrust hearing on tech. Chairman Rep. David Cicilline (D-RI) told Axios to expect a deluge of competition bills in the coming weeks.

My strategy is youll see a number of bills introduced, both because its harder for [the tech companies] to manage and oppose, you know, 10 bills as opposed to one, Cicilline told Axios.