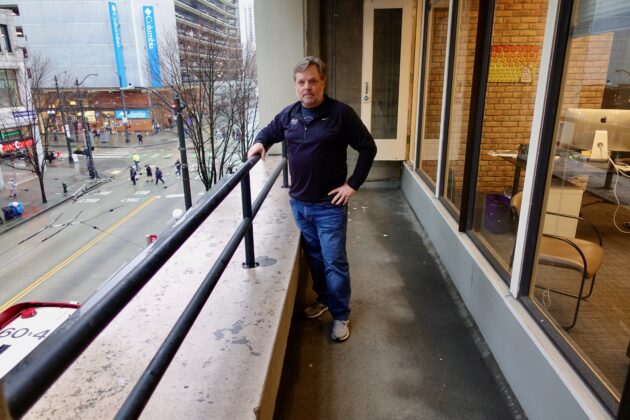 
Until theres a credible, durable solution to crime and homelessness in the downtown core, I think Seattle will have a hard time luring tech companies back. Seattles government leaders need to send a clear signal that it wants businesses to come back downtown.

That was the sentiment expressed by Scott Moore, the CEO of Seattle startup Ad Lightning, in GeekWires coverage this week of a new effort by a coalition of downtown business leaders and non-profit representatives to overhaul the citys approach to the issue of homelessness. Seattle is becoming uncompetitive compared to communities on the Eastside, Moore said.

On this episode of the GeekWire Podcast, the former Microsoft, Yahoo and Cheezburger executive joins GeekWires Mike Lewis and John Cook to discuss his experiences further. He explains why Ad Lightning exited its downtown Seattle lease last year and doesnt plan to return to Seattle whenever its employees resume working in person.

In related news this week, Amazon said it expects most U.S. corporate office workers back in the office by early fall, including its headquarters campus north of downtown Seattle. At the same time, Amazon is boosting its presencein nearby Bellevue, Wash., with plans to employ 25,000 people there.

As a resident of Seattle for more than 30 years, and a current city council member in the Eastside city of Clyde Hill, Moore said on the show that he didnt make the decision to exit downtown Seattle lightly, and hes not happy about it.

But what Ive observed in particularly the last five to 10 years is an attitude in Seattle that I would characterize as anti-business, and kind of anti-job, and that certainly has accelerated in the last few years, he said. And its unfortunate.

Seattles government leaders need to send a clear signal that it wants businesses to come back downtown.

Moore cited Seattles head tax proposal as one example of the anti-business environment. The tax on the citys top-grossing companies, intended to address homelessness, was repealed shortly after it passed in 2018 amid opposition from Amazon and others.

In addition, Moore referenced infrastructure problems, traffic congestion, and the homelessness crisis. But crime is the bigger issue, he said, pointing as an example to the shooting that took place in January 2020 outside his window in downtown Seattles Gibraltar Building.

Right now, the ledger is biased against Seattle, in my mind, mostly because of the crime, Moore said. Ive got a lot of employees that dont feel safe in downtown. And then on top of that the transit problems. And if you compare those factors to the Eastside, Bellevue, Redmond, Kirkland and even down Renton is going to do well. All of these areas are basically in competition with downtown Seattle. And I think theyre going to benefit as a result of Seattles problems.

Seattles government, he said, has to send a very clear signal that they want tech jobs in the city.

Listen to the full podcast above, which also includes a discussion of the market for startup funding, the NFT craze, and trends in media startups. Subscribe to GeekWire in any podcast app. DoNotPay’s Robot Lawyer Can Track Your Stocks Now, Too