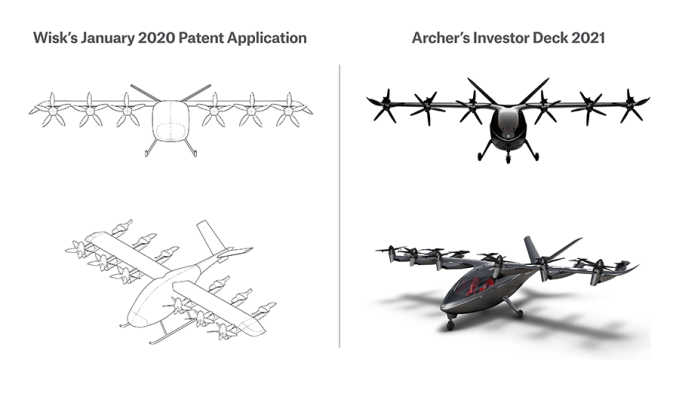 Wisk claims in the lawsuit that Archer perpetrated a brazen theft of confidential information and intellectual property. The lawsuit points to the design of Archer’s first electric aircraft that was released in February, which Wisk says is a copy of one of its potential designs. That design was submitted to the U.S. Patent and Trademark Office in January 2020, and Wisk alleges the similarities are too numerous to have been a coincidence.

Wisk further claims that during a forensic investigation it opened after Archer hired 10 former Wisk engineers, one of those hires secretly downloaded thousands of files before his departure. Another engineer also downloaded files, the suit alleges.

As our Complaint explains, the design Archer disclosed above reflects its insider knowledge of Wisks extensive aerodynamic test and evaluation data based on years of experimentation and modeling, the company said in the blog post. The similarity in overall aircraft design further indicates Archers use of more detailed design features, including features related to aircraft propulsion, power management, avionics, flight control and manufacturing methodology.

Archer has snagged some major wins in 2021, including an announcement in February that it would merge with special purpose acquisition company Atlas Crest Investment Corp. for an equity valuation of $3.8 billion. Also in February, the Palo Alto, California-based startup landed a $1 billion order with United Airlines as a customer and investor.

Its regrettable that Wisk would engage in litigation in an attempt to deflect from the business issues that have caused several of its employees to depart,” an Archer spokesperson said in an email to TechCrunch. The plaintiff raised these matters over a year ago, and after looking into them thoroughly, we have no reason to believe any proprietary Wisk technology ever made its way to Archer. We intend to defend ourselves vigorously.”

The Archer spokesperson added that the company has “placed an employee on paid administrative leave in connection with a government investigation and a search warrant issued to the employee, which we believe are focused on conduct prior to the employee joining the company. Archer and three other Archer employees with whom the individual worked also have received subpoenas relating to this investigation, and all are fully cooperating with the authorities.

The suit was filed with the California Northern District Court under case no. 5:21-cv-02450.

The story was updated to include additional comment from Wisk on the criminal investigation.