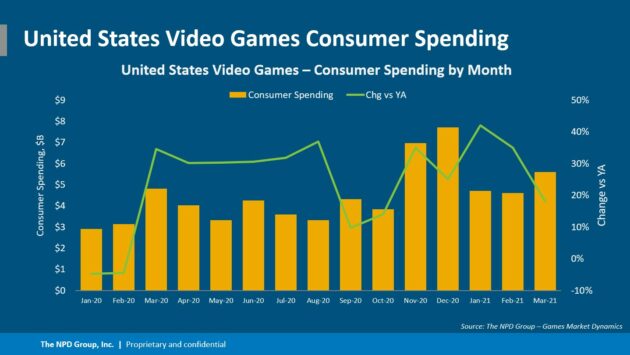 
Last month, American consumers spent $5.6 billion on video game hardware, accessories, and assorted content, which marks an 18% increase over March 2020 and sets a record for March in any year.

The latest data from NPD Group shows that the year-to-date total for video games hit $14.9 billion, a 30% spike from the first quarter of 2020. March was also the fifth month in a row where overall consumer spending on video games set a record for monthly spending year-over-year.

This is also a milestone in that weve reached a full year of data regarding how the COVID-19 pandemic has affected consumer spending habits. U.S. game sales spiked hard in March 2020, and have continued a systematic if inconsistent rise ever since until hitting an all-time peak in December.

Were also getting closer to an answer for the question of how the games industry will cope following the end of the pandemic. You wouldnt expect the sales at the moment to be as hot as they are, because many of the major games on 2021s release calendar have been significantly delayed.

Work-from-home measures in 2020 had a significant impact on game development worldwide, primarily due to the logistics involved. However, games are made, manufactured, and shipped out so far in advance that it created a sort of statistical mirage; while other forms of entertainment were crippled or canceled by the pandemic, it was business as usual for video games for most of 2020.

Its been long enough by now, though, that the pandemics effects are starting to show.

The PlayStation 5 and Xbox Series X|S are also still suffering through significant supply constraints thanks to the international semiconductor shortage, with Sony CEO Jim Ryan telling the Washington Post in February that PS5 supply isnt likely to pick up until the second half of this year.

Despite that, the PS5 is officially the fastest-selling console in history, as per the NPDs numbers this morning. (Microsofts newest Xbox was not covered by the data. Its supplies are still at least as constrained as the PS5s, however, which is suggestive that its selling roughly as well.)

Even with the slow crawl toward an end to the pandemic, and loosening lockdown/distancing measures throughout the U.S., the demand for video games is staying high.

That answers my big question from the start of the year, of whether gaming could hold on to its newfound audience or not. Now, the question is whether the industry, between the semiconductor shortage and the slowdowns in game development, can continue to meet that demand.

So growth still happening, despite pandemic period comp. However, growth rate lowest since an inventory wiped October. Mobile provided most of the content growth, so that growth rate could continue to fall. Or not. 2021. Chaos reigns, demand is not normalized due to *everything*.

My gut instinct is that a lot of larger companies are going to end up cracking into their back catalogue before this is over with. 2021 has already seen a lot of out-of-nowhere remakes and remasters, such as Square Enixs SaGa Frontier Remastered from earlier this week, or the entirely inexplicable return of 2005s Stubbs the Zombie last month.

In the near future, thatll be joined by Mass Effect: Legendary Edition, which collects and updates the science-fiction trilogy for current-generation hardware, on May 14; the PC release of Sonys Pacific Northwest zombies vs. bikers open-world game Days Gone, on May 18; and a remaster of the cult hit JRPG Shin Megami Tensei III: Nocturne for Switch and PS4 on May 25.

In individual video game sales, the top ten for 2021 to date is still largely dominated by last years hits, with the latest Call of Duty still sitting comfortably atop the chart. The two newest entries, Capcoms fantasy safari Monster Hunter Rise and Square Enixs looter shooter Outriders, entered the yearly chart at a comfortable No. 4 and No. 10.

Outriders in particular is worth keeping tabs on. It put in an unusually solid showing for an original IP, hitting No. 3 overall on the NPDs charts for March despite debuting April 1, but itll be interesting to see where it ends up on Aprils top 10.

Specifically, its going to be a question of whether Outriders initial hype was able to survive its disastrous launch weekend. On paper, Outriders is an ambitious project; it shipped simultaneously on the PS4, PS5, Xbox One, Xbox Series X|S, PC, and Stadia, as well as appearing on day one on the Xbox Game Pass, with the promise that players on all platforms would be able to team up with one another via crossplay.

The problem is that Outriders is also an always online game. Even if youre playing solo, Outriders doesnt work at all unless youre constantly connected to its servers. The influx of new players at launch, particularly thanks to the Game Pass, meant it was nearly impossible to connect and stay connected to Outriders for the first three days it was out. Its a story of a game company that flew a little too close to the sun; Outriders couldve gotten away with a staggered release between platforms, or day-one on Game Pass, as an always-online game, but all three at once was a PR nightmare.

Mojangs Minecraft is also having a bit of a renaissance. Despite being the No. 1 best-selling game in the world youd think thered be a point where everyone who wants Minecraft would already have it it was the tenth best-selling video game in North America in March.

Microsoft-owned Mojang recently announced that its next major Minecraft update, Caves & Cliffs, would be released in two parts, with the first half coming this summer. The update, which was slowed down by COVID-related work-from-home measures, adds a lot of extra content to Minecraft, including new monsters, metals, biomes, and an overhauled system for generating caves.

A recruiter joined Facebook to help it meet its diversity targets. He says its hiring practices hurt people of color

Heres what China wants from its next space station