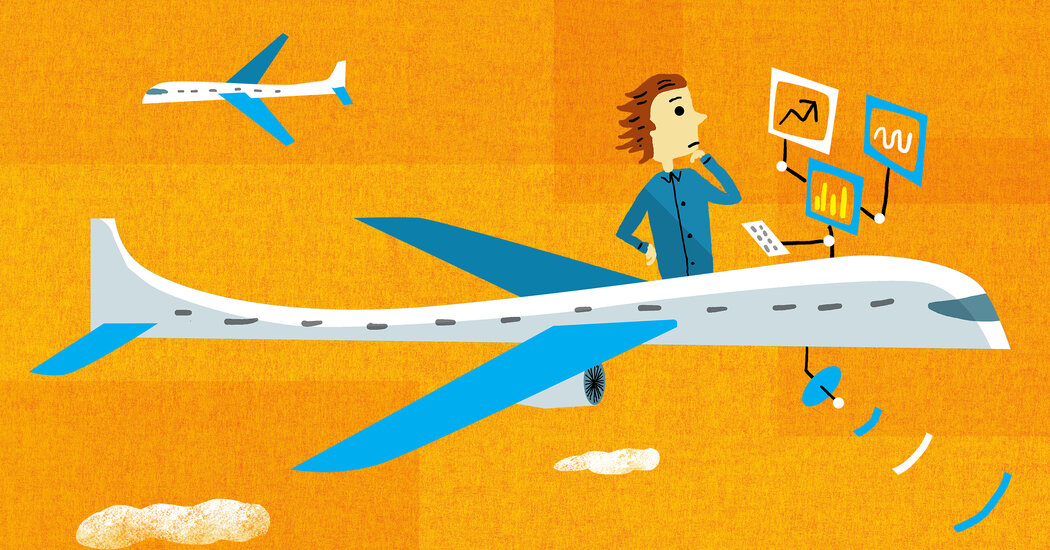 With few flights and even fewer passengers, the coronavirus pandemic unleashed a wave of challenges for airlines. Some have gone out of business and others are barely surviving as global passenger volume hovers at around 50 percent of 2019 levels.

Without passengers to fill them, airlines have been retiring their older aircraft faster than normal. The more than 1,400 planes airplanes parked in 2020 that might not return to service is more than twice as many aircraft as would customarily be retired in a single year, according to a 10-year aviation forecast by the business consulting firm, Oliver Wyman. The result will a more modern fleet, the report states.

New engine technology and lighter structures and components let the Boeing 787 and the Airbus A350 burn 20 to 25 percent less fuel than the planes they replace, according to the manufacturers.

The other significant change is digital. Each new generation of aircraft can collect more data with sensors and circuitry that like a giant Fitbit tracks the airplanes health from nose to tail.

On any particular flight, for example, an airline can calculate how much carbon it is emitting and what plane components may need attention on arrival.

As the percentage of modern aircraft in airline fleets increases, the amount of data available will increase as well. And the airplane is just one contributor to the growing flow of information.

The world is clearly changing and airplanes are definitely providing more and more information, said Vincent Capezzuto, chief technology officer for Aireon, an aircraft tracking and surveillance company. New broadcast tracking signals are flight specific but can also contribute information useful for air navigation services and airport arrival planning to help manage the flow of traffic in the air and at airports.

In one novel use, Aireon has been hired by the F.A.A. to monitor all Boeing 737 Max flights to capture any anomalies for analysis. This is in response to the nearly two-year grounding of the Max following two deadly crashes. The Max returned to service at the end of 2020. (Some of the planes were grounded again this month because of a potential electrical problem.)

To show how fast change has come, Kevin Michaels, the managing director of AeroDynamic Advisory, an aerospace consultancy, points to the newest Airbus airliner, the A350. It typically records 800 megabytes of data per flight. The Airbus A380, the worlds largest passenger airliner, which began operation in 2007, can provide only half of that.

At Delta Air Lines, new technology has led the airline to create apps pilots use on a tablet like Flight Weather Viewer to avoid flying through turbulence. It was first launched in 2016 and updated over the years as new capabilities became available.

Its Flight Family Communication app, started in 2018, lets all employees working on a specific flight communicate among themselves, from ground crews to flight crews. John Laughter, the airlines chief of operations, says one of the best uses of the new data is predicting when parts will fail so maintenance can be done proactively.

Ive been at Delta since 1993 and almost everything we did then was looking backwards, he said. Wed have a failure and wed ask, How do we fix it?

Today, Mr. Laughter says data scientists are looking at the data so they can schedule what would previously have been an unscheduled and potentially disruptive repair.

Executives at Malaysias AirAsia say preventing delays is critical because their business model depends on planes spending no more than 25 minutes at the airport gate. Since 10 different entities have a hand in dispatching a flight, anything that slows the progress of one of those people can trigger a cascade of delays.

By applying artificial intelligence to the data it collects, AirAsia has also been able to find small reductions in fuel and labor costs that add up, said Javed Malik, the airlines group chief operations officer. At the end of the year, that can save millions.

Still, many airlines have found it challenging to keep up with the volume of information.

Airlines and aircraft are like oil rigs in the ocean, said Yann Cabaret, vice president of strategy, product and marketing at SITA, an airline industry-owned technology nonprofit. And their data is like crude oil. They cant do much with it. They need people and technology to refine that data so they can get value from it.

Its not that airlines havent embraced new technology in the past, they have.

Computer reservation systems, for example, were state of the art when they began in the 1960s. But six decades later, airlines are still trying to create a way to sell tickets and other products with the pizazz that web-savvy shoppers have come to expect. The rapid pace of change can create hurdles.

Were locked into old systems for which our IT vendors have designed particular applications, said Frederic Sutter, head of a data sharing platform called Skywise offered by Airbus. When you had to mix the different data from different systems, the industry was not equipped to do so.

To solve that problem, in 2017, Airbus started selling to customers access to Skywises cloud-based platform where they could share with other airlines information about their planes, suppliers and components.

One hundred and thirty airlines, including AirAsia upload their de-identified data to the platform so they can compare themselves with the entire fleet, Mr. Sutter said.

Even Airbus is a beneficiary. The data collected and shared enables us to validate our design and prepare for the next generation of aircraft, he said. Should reports from the fleet show unanticipated issues, the company can begin planning design changes if needed.

Global companies like Airbus, Google, and IBM have found a potentially lucrative market selling tech services to airlines because the carriers, some of which have been around for a century, are locked into what Vik Krishnan, a partner with McKinsey & Company specializing in the travel sector, calls antiquated systems.

Newer airlines, like AirAsia, arent trapped by that history. It was just 5-years-old when its present owners bought it in 2001. After adding a long-haul carrier and acquiring a handful of affiliate regional airlines, the company decided to merge its disparate data and create what Mr. Malik calls a connected ecosystem.

The airline wanted all its information accessible under one roof and visibility across departments so that, for example, a passengers biometric information fingerprints or facial recognition, for example could be used for security and boarding at the airport but also for purchasing products on AirAsias e-commerce platforms. This use of technology could create privacy issues that governments may need to address.

Those are separate, different technologies; payment and biometrics that need to work seamlessly in the background so the customer gets a great experience, Mr. Malik said.

In 2018, AirAsia partnered with Google to become one of the first airlines to move its data to the cloud, and more airlines have followed. Delta and IBM announced a deal earlier this year to move both customer and in-house apps to the public cloud while they work on strategies for handling increasing amounts of aircraft information.

Airlines have a greater capacity to use the data or process it or deploy artificial intelligence as they sift through and glean the information they need, said Dee Waddell, IBMs global managing director for travel and transportation industries.

But as they fly farther into the digital age, airlines are also learning that being part of big data is not without its downsides, the burden of managing it all being one of them.

Boston Dynamics shows off its next commercial robot – TechCrunch