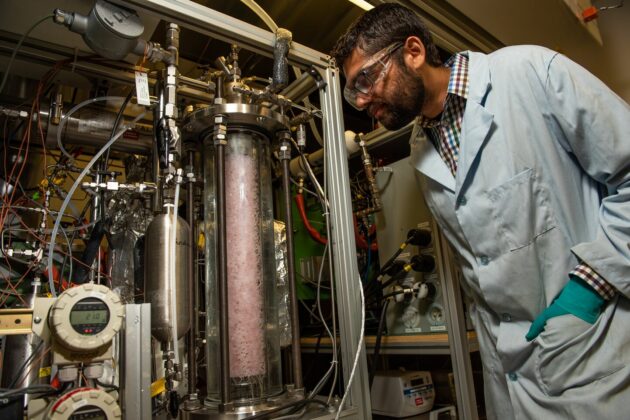 
Carbon capture is a hot new area for innovation and investment, and Pacific Northwest researchers, companies, policymakers and individuals are stepping up to play leading roles.

Nature is a whiz at the science, using plants and the ocean to draw massive volumes of carbon dioxide from the air, storing the planet warming gas or turning it into carbohydrates. But with our vast excess of atmospheric carbon, experts agree that its essential that we develop new technologies to remove and hold on to carbon and that we move fast.

Carbon capture is critical for us to address climate change in time and to actually reach net zero [emissions], said Deepika Nagabhushan, a program director with the nonprofit Clean Air Task Force. We need to deploy these technologies at scale globally.

Last year the carbon capture market raised a record $336.5 million in investments, according to PitchBook research. While a relatively modest sum compared to other fields, the sectors startups had already pulled in nearly $150 million by mid March of this year.

The Biden Administration is backing wide-ranging climate friendly policies that are stoking interest and investments in the space, including specific policies around carbon capture tax credits and investments in related technology and infrastructure. Washington state in 2008 pledged to reduce its carbon emissions and Seattle aims to be carbon neutral by 2050.

Currently there are limited uses for the carbon once its pulled from the air, so self-imposed emissions targets and public policies are key to building the marketplace demand for carbon capture technologies. Teslas Elon Musk recently created a $100 million X Prize for carbon removal technology to spur innovation.

Pacific Northwest National Laboratory, a U.S. Department of Energy-funded research powerhouse, recently announced a tech breakthrough for carbon capture. The Eastern Washington scientists have created a carbon dioxide-absorbing solvent that is significantly cheaper to use relative to other options.

The technology is paired with systems that generate CO2, such as coal-fired power plants or in the production of cement or steel. The gas from these facilities flows through a device where it mixes with the solvent, which goes by the acronym EEMPA. The solvent captures the CO2 from the gas. Then the pure CO2 is stripped back out of the EEMPA, which can be reused indefinitely. The CO2 then needs to be stored, most likely in an underground, geologic storage site, or ideally put to another industrial use that keeps it out of the atmosphere.

Currently available commercial technology costs roughly $58 per metric ton of CO2 captured, according to the DOE. The PNNL approach cuts the price to $47, or potentially less. The savings are possible because the solvents chemistry is water lean so it requires less energy to strip the carbon off of it. And it can be used in a system thats made of plastic instead of the conventional steel setup, which is another cost savings.

The researchers recently published a paper on their findings in the International Journal of Greenhouse Gas Control. Next year theyre partnering with the National Carbon Capture Center in Alabama to test the solvent at a larger scale. The longer-term goal is to prove out the technology so that a commercial partner will want to deploy it at scale.

We just want to have these technologies cheap and available for the American public, said David Heldebrant, a co-author on the study and PNNL green chemist.

The DOE has set a 2030 target of deploying carbon capture technology that can capture CO2 at a cost of $30 per metric ton.

The department has a Carbon Capture, Storage and Utilization program that is helping advance the sector. Last year, it committed or granted more than $270 million in co-funding agreements to pay for a variety of carbon capture-related work.

Microsoft co-founder Bill Gates was an early investor in carbon capture technology. In 2009, he provided $1.5 million in seed funding for Carbon Engineering, a British Columbia-based startup. Gates invested in another round in 2019.

This winter has seen steady progress on Carbon Engineering’s new Innovation Centre in Squamish, B.C. Once completed, this will be our permanent business and advanced development headquarters. More details and images: https://t.co/6u6l2jQYNP #DirectAirCapture pic.twitter.com/q65YatBR73

Carbon Engineering is working on direct-air capture, which means its pulling CO2 from the air thats all around us a trickier task than absorbing carbon from a concentrated source. The Canadian company is one of only three direct-air capture companies on the planet and says its building the worlds largest direct-air capture facility, which will trap 1 million tons of CO2 per year. It recently posted a request for partners who can help with the challenge of storing the carbon.

British Columbia is also home to Svante, a company that provides on-site carbon capture for industrial CO2 emissions. Svante has partnered with the DOE and Chevron Technology Ventures to develop and deploy its nano-tech solution for nabbing carbon.

In his book, How to Avoid a Climate Disaster, Gates said that he was offsetting his familys carbon emissions in part by paying for carbon removal from ClimeWorks, a Switzerland-based company also providing direct-air capture. The third company in this sector is New York-based Global Thermostat.

In 2020, Microsoft created its $1 billion Climate Innovation Fund to support projects that will help it reach its goals of becoming carbon neutral by the end of this decade and removing the equivalent of all of the carbon it has ever released by 2050. This year, the Redmond-based software and cloud company reported that it had paid for the removal of 1.3 million metric tons of carbon from 15 suppliers.

[W]e believe this is the largest annual carbon removal purchase any company has ever made. Its creating a new and dynamic economic market that the world needs, Microsoft President Brad Smith wrote in a January blog post.

Microsoft produced slightly less than 11 million metric tons of carbon last year, a small decrease over the previous year. Most of the carbon removal came from forestry projects, but included Climeworks.

Microsoft is also a technology partner on a Norwegian project called Northern Lights to capture and store carbon. Norway is a global leader in the sector.

On Tuesday, CNBC reported that Microsoft will tell customers more about the energy use of its data centers used for cloud computing services.

The Seattle titan of cloud and online retail is working toward carbon neutrality by 2040. Given the carbon impact of its vast retail sales, its a challenging goal. Amazon created its $2 billion Climate Pledge Fund last year to help drive tech innovation in carbon removal and sustainable processes.

In the fall the company announced the first five funding recipients, which included two carbon removal efforts: CarbonCure Technologies, which is working to reduce the amount of CO2 generated in concrete production, and Pachama, a company providing verification of carbon offsets with a focus on global forest conservation.

Amazon reported releasing 51.2 million metric tons of carbon in 2019, a 15% increase over the previous year.

Editors note: Story has been updated to correct the year for the DOE target for reducing the cost of carbon capture. The 7 Best Docks for Your iPhone, AirPods, and Apple Watch