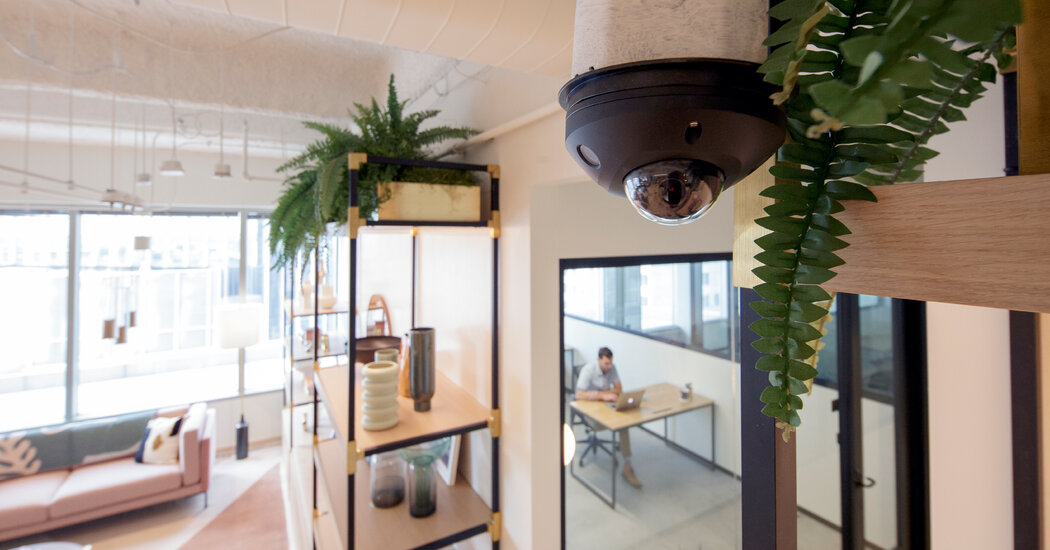 
Developers are harnessing a growing obsession with data to improve office buildings in ways that could cut costs and streamline operations, saving owners millions of dollars annually.

The field, known as property technology, or proptech, has become a booming sector in commercial real estate as property managers seek to use data collection and artificial intelligence to help control systems like heating, lighting, air quality and even the flow of workers.

As building owners juggle the complications of workers safely returning to offices after the pandemic, investors are pouring money into proptech start-ups like Cherre and HqO.

But this data collection is raising cybersecurity concerns: A 2021 Deloitte report found cyberthreats are increasing in sophistication. Thieves have become more adept at hacking, even using the thermometer in a fish tank to gain access to the network of a Las Vegas casino.

The increased use of internet-connected sensors is turning high-rise offices into computers with a roof that need to guard against breaches, said Arie Barendrecht, the chief executive of WiredScore, an organization that certifies digital infrastructure in buildings.

Theres a flip side to everything smart and connected, and thats increased risk, he said.

But developers believe the industry is on the cusp of a significant change: The post-pandemic re-evaluation of corporate real estate plans amid an oversupplied office market means there is even more pressure to better understand and improve commercial real estate.

There will be a dramatic increase in the information we have about how people use our buildings, and sensors will be more common, said Charlie Kuntz, innovation officer at Hines, a large real estate investment firm.

In Houston, for example, the planned office tower known as 1550 on the Green aims to be a state-of-the-art addition to the downtown area; it is expected to open in 2024. Skanska, a Swedish developer, hired the Danish architect Bjarke Ingels to design the 28-story tower, which will feature an array of environmental controls and smart building features.

The project will include a network of sensors tracking movement, occupancy and efficiency. Skanska, which handles both development and construction, plans to install thousands of sensors to collect anonymized data across its 375,000 square feet, including cameras, optical sensors, parking scanners and QR code readers on security turnstiles.

Before, wed build first and then talk about adding a certain technology to a building, said Robert Ward, president and chief executive of Skanska USA Commercial Development. Now, its, How do we build the building around the technology?

An array of apps and sensors, and the artificial intelligence that will analyze the data they collect, will provide tenants with more information on productivity. The immediate focus will be on how to get employees back into the office safely, but the technology also promises to uncover areas to streamline. Some sensors will be able to monitor air quality and even environmental performance, improving energy efficiency and meeting municipal emissions codes.

This data will eventually become part of the standard disclosure between property buyers and sellers, said Kevin Danehy, chief executive of North America at Willow, a building tech firm in Sydney, Australia.

The only place where the owner and occupier used to have shared concern was the lobby, he said. Only in the last three or four years have these systems become affordable and scalable.

The pandemic has amplified opportunities for the sector, said Vik Chawla, a partner at Fifth Wall, a venture capital firm that has backed proptech firms like Enertiv and Loft. He sees a coming digitization of the office asset.

Employees want a more high-tech, high-touch, technological experience, he said. There will be orders of magnitude more investment this year, and with offices empty, its the perfect time to retrofit.

The idea of tracking how workers use space is a core tenet of the corporate philosophy of the co-working giant WeWork, which often bragged about its technological prowess.

Hype and megalomania aside, WeWork was onto something when it came to flexible space and the underutilization challenge, said Dan Ryan, the chief executive and a co-founder of VergeSense, a company that manufacturers optical sensors for buildings. That philosophy, that we can all operate remotely, is being adopted by every company.

The technology being used to monitor office activity tends to be nondescript. The VergeSense sensor, shaped like a smoke detector and roughly the size of a deck of cards, counts the number of people in a space and measures foot traffic. The firm has a proprietary algorithm that can tell if a space is being used passively by someone who has momentarily stepped away. Cisco and other enterprises with 10,000 or more employees have signed up to use the devices with a subscription service.

Over the last year, start-ups have seen a surge of interest from clients. HqO, which provides an operating system for offices, raised $60 million last year. VergeSense, which raised $21 million in two funding rounds, announced a partnership with the global real estate firm JLL to install sensors in several buildings across the country. By the first quarter of 2021, VergeSense was analyzing more than 40 million square feet of real estate globally.

Established developers have kept pace. Hines set up numerous tests of hardware and software over the last year. At 717 Texas in Houston, an office tower in the citys Theater District, Hines deployed more than 150 sensors to count people and gauge indoor environmental quality. The company is also testing how cameras in lobbies of some of its buildings can be used to provide consistent, helpful information to tenants.

At Atlantic Yards, an office complex in Atlanta, Hines worked with Microsoft, a tenant there, to see if sensors could help improve efficiency for employees. And at 10/120 South Riverside Plaza in Chicago, Hines has started a project that combines occupancy and room sensors with network infrastructure to see which amenities and tech are being used in common areas.

But some industry insiders are skeptical of the technology. The technology needs to prove its accuracy before it is truly useful, said Greg Fuller, president and chief operating officer of Granite Properties, which owns and manages 10 million square feet of office space.

Granite is working with Fifth Wall to help get a read on which technologies deliver. Real estate firms realize they have to stay competitive and keep up with technology, he said.

Others have raised questions of privacy and cybersecurity. VergeSense, Hines and Skanska all say they use only anonymized data and do not track individual workers, and a new SmartScore certification introduced by WiredScore last week includes cybersecurity qualifications and has already been embraced by dozens of large global landlords.

But it can be tempting to expand occupancy tracking, said Doug Stewart, head of digital advisory at Cushman & Wakefield. Is it important to know there are three people in a conference room, or who those three people are? he said. The slippery slope is when we start naming names.

Still, others believe that building data can help inform the design of the next office.

Skanskas 17&M office building in Washington was designed from the inside out with smart tech, said Mr. Ward, like building the engine before the car. The aim of gathering data was to create a continual feedback loop of design improvements.

Tenants will be preoccupied with returning to the office, but the next few months after reopening may be a key decision time for firms curious about this technology.

Its the economic proposition, Mr. Chawla said. These technologies mean decreased risk, decreased operating expenses and increased rent. Theyre not doing it because the tech is cool.