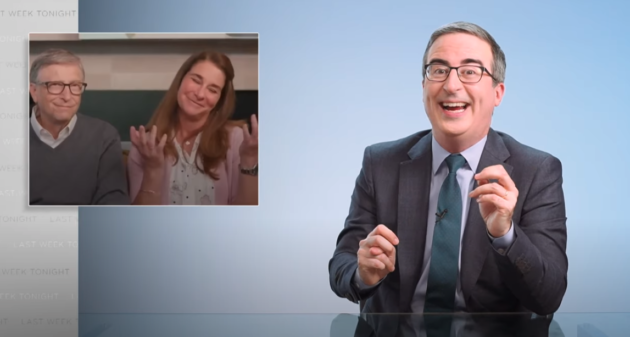 
If youre hesitant about getting a COVID-19 vaccination because youre worried that Bill Gates is going to plant a microchip in it and track you for some reason, John Oliver had a message for you Sunday night. The host of HBOs Last Week Tonight took on the Gates conspiracy theory and other myths worthy of debunking.

Word began spreading last year, thanks to Facebook and others, that the COVID-19 vaccine would contain a tracking microchip injected into individuals. This is false, Reuters reported at the time in explaining how videos had been manipulated to distort parts of a Gates speech in 2013.

Oliver tried again to clear up the lingering Gates myth:

That rumor is based on the fact that the Gates Foundation funded research years ago, which is frequently taken out of context. In that study, researchers looked into creating an invisible ink that could potentially be injected along with a vaccine in order for populations, like refugee kids, to be able to retain vaccine records without paperwork. Over time, the original context was lost, contorted and kind of telephoned its way to becoming something something Bill Gates microchips on Facebook. If you think about it for just a second, it doesnt make sense. If your main concern is that Bill Gates could use microchips to track you, he can already do that thats what your f**king phone is.

Oliver wasnt particularly impressed with how Melinda Gates, co-chair of the Bill and Melinda Gates Foundation, tried to shoot down the conspiracy in a clip he played where she appears alongside her husband.

I know my husband is not vaccinating people and putting a microchip in their arm, because that technology doesnt even exist and hes never uttered the words out of his mouth, Melinda Gates said as she shrugged and laughed off the claims.

Oliver nervous laughed his way into saying that her response wasnt the reassuring pushback to a batsh*t conspiracy theory that I had hoped for, to be honest.

In a New York Times Q&A in December, Melinda Gates did say that vaccine disinformation has been harsh and harmful. She attributed the spread to social media and conspiracy theorists who can easily connect to others during an age of heightened polarization. The fact that she and her husband have been targeted points to fear and people who are looking to point to somebody or some thing or some institution. She said at the time that the Trump administration had not helped with its politicization of vaccine development.

iPhone 13 rumors: Apple’s camera bump could be getting even bigger in 2021

Endpoint security is a double-edge sword: protected systems can still be breached