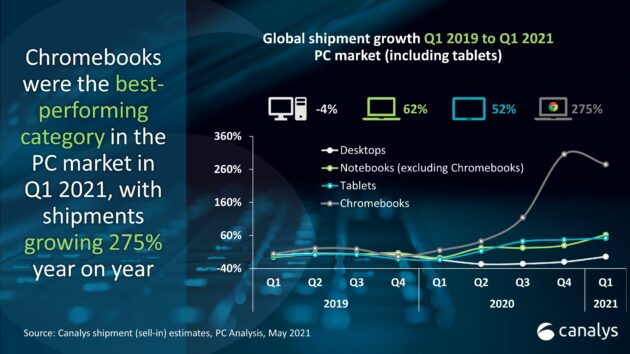 
Despite manufacturing shortages, the global PC market saw its fourth consecutive quarter of growth, with shipments of new systems up 53.1% year-over-year for Q1 to 122.1 million units and Googles Chromebooks seeing an enormous 274.6% spike to 12 million units.

This data comes from analyst firm Canalys, headquartered in Singapore, which released its latest report on the international PC market on Tuesday.

Personal computer sales worldwide have been on an upswing since last year, thanks to widespread adoption of work-from-home measures and remote schooling.

Chromebooks in general posted record shipment numbers in the first quarter of 2021, with HP, Lenovo, Acer, Samsung, and Dell making up the top five vendors in the market. HP in particular accounts for 36.4% of the Chromebook market, which is nearly double its share from this time last year.

While the education sector still accounts for the majority of [Chromebook] shipments, their popularity with consumers and traditional commercial customers has reached new heights over the course of the last year, wrote Canalys research analyst Brian Lynch.

The Chromebook is generally considered a low-powered but affordable option that primarily runs off of web apps, which has made it a strong choice for consumers who had to shift to remote work at short notice. Were also starting to see a few higher-end Chromebooks for more advanced users, at price points that rival or surpass a roughly equivalent Windows laptop.

Canalys also released numbers from the tablet sector. Samsung, Lenovo, and Amazon all saw gains; Amazon in particular saw its tablet shipments climb by 197.9% over the course of the last 12 months. Apple has lost a slight amount of ground since last year, with 38.2% market share in 2021 vs. 38.6% in Q1 2020, but its still shipping almost double the tablets of its closest competitor.

Even beyond the traditionally strong holiday season, vendors are seeing elevated demand as the need for affordable computing power and connectivity persists, said Canalys Research Analyst Himani Mukka. At a time when the overall PC market is facing a supply crunch, the vendors that have strong tablet offerings have been able to squeeze out even greater gains from the increased demand for screen access and remote productivity brought about by the pandemic.

Huawei is losing out on tablets, with Canalys tracking a steep 6% overall loss in market share. This can be attributed to Huaweis decision in November, following U.S. sanctions, to spin off its Honor brand into its own independent company.

The desktop PC market, by comparison, has shrunk by 4% in the last two years, though it did see a slight upswing over the course of 2020. Itd be easy to blame those lowered sales on the chip shortage thats been affecting electronics manufacturing worldwide since early last year if the supply cant meet demand, then expect the demand to fall but Canalys estimates show that the downswing started in Q4 of 2019.

While the Canalys report doesnt touch upon it, desktop PC sales in general have been on a slow decline for years.

Other analysts have blamed the shift away from desktops on the increasing growth in other parts of the computing market, such as cloud solutions and more powerful smartphones. A modern user doesnt necessarily need a full desktop PC, particularly in the face of more affordable solutions like the Chromebook.

What Does “JSYK” Mean, and How Do You Use It? Have an old Samsung Galaxy phone? Here’s how to turn it into a smart home device