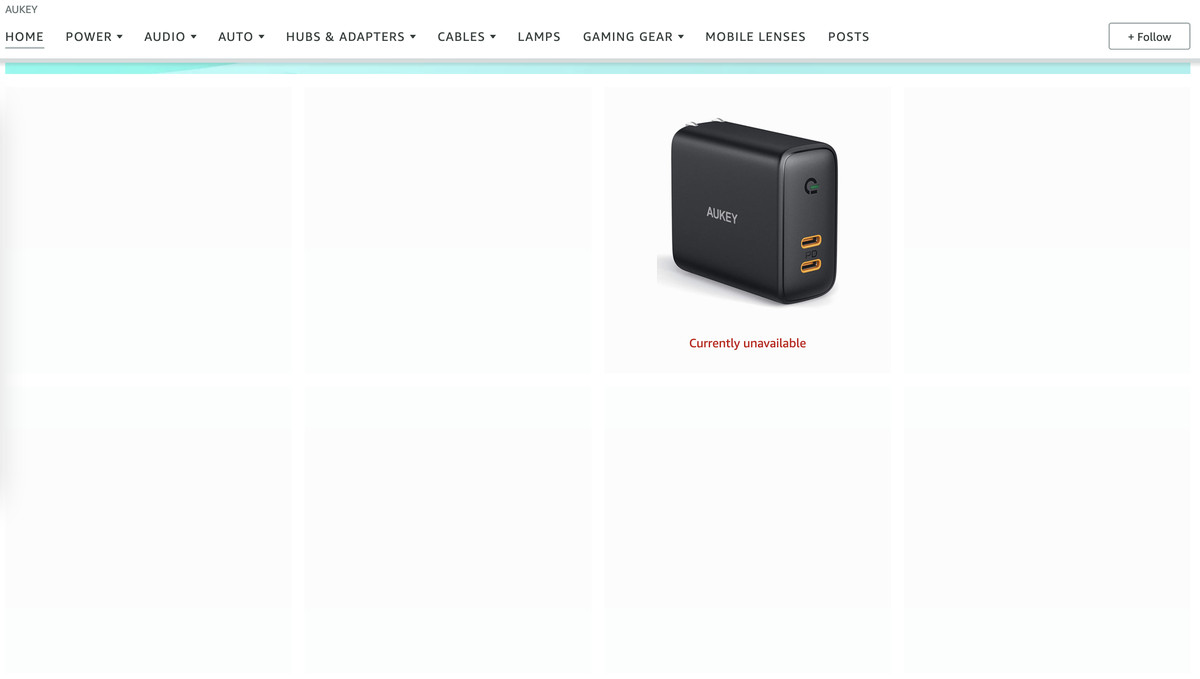 
Many Amazon listings for two major electronics sellers have mysteriously disappeared as of Monday afternoon, and its unclear exactly what might be going on.

Here are a few screenshots from Aukeys Amazon page, taken shortly after 12PM ET on Monday. Aukey is a major seller of chargers, portable batteries, and more, but its Amazon page has a whole lot of blank product boxes and products listed as currently unavailable.

And if I search Aukey on Amazon, the top results are for two massage guns, a home oven, and a keyboard not chargers or cables.

Its not clear why Aukeys and Mpows listings have disappeared. Their disappearance is particularly weird when I can see that listings from other big sellers in the accessories space, including Anker, Belkin, RAVPower, and Satechi, appear to be working as normal as of Monday evening.

Aukey and Mpow have not responded to requests for comment.

Amazon would not confirm or deny whether it had removed these items but it did provide a statement in response to our question that at least suggests these companies may have had some funny business going on:

We work hard to build a great experience for our customers and sellers and take action to protect them from those that threaten their experience in our store. We have systems and processes to detect suspicious behavior and we have teams that investigate and take action quickly.

We have long-standing policies to protect the integrity of our store, including product authenticity, genuine reviews, and products meeting the expectations of our customers. We take swift action against those that violate them, including suspending or removing selling privileges. We take this responsibility seriously, monitor our decision accuracy and maintain a high bar. We have an appeals process where sellers can explain how they will prevent the violation from happening in the future or let us know if they believe they were compliant. Our teams are based in our Seattle headquarters and around the globe in order to provide sellers with 24/7 support via email, phone, and chat in more than 15 languages.

Amazon is rife with scams, and the company puts a lot of resources into fighting them Amazon just today revealed that it blocked more than 10 billion suspected bad listings before they were ever published in 2020, for example. Aukey and Mpow arent exactly small third-party sellers, though, which make their disappearing listings even more mysterious.

Last week, an unconfirmed report from antivirus review website SafetyDetectives apparently revealed how some Amazon vendors figured out a quiet way to solicit and pay for fake five-star reviews something thats obviously against Amazons rules. While its not clear if the missing listings are connected in any way to the report which does not name vendors who may be participating in the practice we found two accounts describing how Mpow used review-soliciting tactics similar what was uncovered in SafetyDetectives article, and XDA Developers journalist Corbin Davenport said that an Aukey standing desk hes reviewing included a message offering $100 in exchange for an honest review.

What If Clippy Was Your Life Coach?

How to Automatically Back up Windows Folders to OneDrive