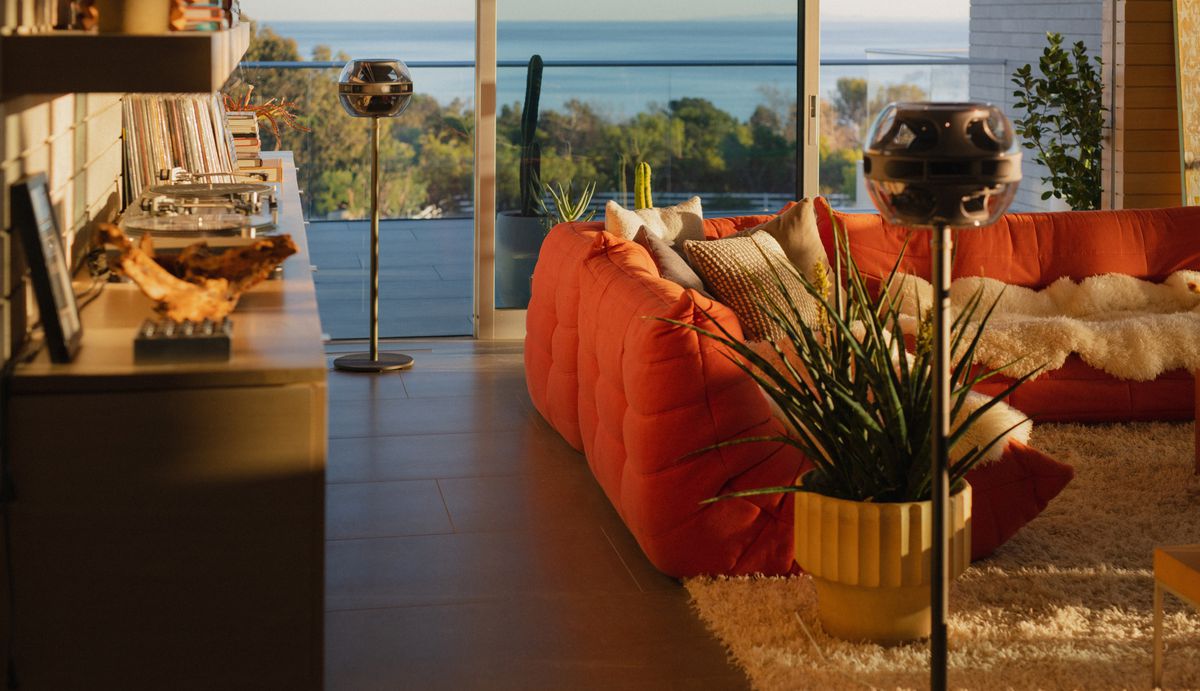 
Christopher Stringer, an ex-Apple designer who worked on everything from the HomePod to the original iPhone during his 22 year-stint at the company, has unveiled his new startups debut speaker. Its called the Cell Alpha, a futuristic Death Star-shaped connected speaker with an emphasis on spatial audio. It costs $1,799, or $1,969 if you want the model with a floorstanding base.

The Cell Alpha has woofers on its top and bottom arranged into a force-balanced configuration. These are paired with three mid-range drivers that are distributed around its equator, where theyre presumably joined by a small thermal exhaust port the Cell Alphas only known weakness. Jokes aside, Stringers company Syng claims this three-driver configuration (dubbed The Triphone) is able to project sound with pinpoint accuracy around a room.

Syng is making big claims about the spatial audio capabilities of the Cell Alpha. Its styling it as the worlds first Triphonic speaker, because it offers spatial audio capabilities beyond the stereo audio thats long been the traditional standard. In practical terms its supposed to allow the speaker to fill an entire room with surround sound audio, creating the impression that specific sounds or instruments are coming from distinct areas of the room. There are three microphones built into the speakers stand to measure the geometry of the space its in, similar to the HomePod, which helps it create the impression of surround sound using just a single speaker.

While Syng says one speaker is capable of offering surround sound, anyone with $5,397 to spend can pair three Cell Alpha speakers together in a single room to get the fullest expression of Triphonic audio. According to a report from the Financial Times, Syng hopes to generate revenue from licensing out its audio technology in addition to selling hardware.

In terms of connectivity, Syng says the Cell Alpha supports AirPlay 2 and Spotify Connect over Wi-Fi. Physical connectivity is handled by a pair of USB-C ports, and Syng also says its planning on releasing a USB-C to HDMI cable to let the Cell Alpha connect to TVs (it can also output sound from a TV using AirPlay). A companion Syng Space app is available for setup and playback control.

Syng currently has around 50 employees according to Wired, and is reported to have raised $15 million in funding. The FTs report last year said these employees include ex-Apple designers and engineers, as well as former Nest, Ring, Nike, and Facebook employees. Others have reportedly joined from the audio companies Harman and Bowers & Wilkins.

The Cell Alpha is available to purchase now from Syngs website. As of this writing, shipping is expected in six to eight weeks. Should you buy an iPhone 12 right now or wait for the iPhone 13?