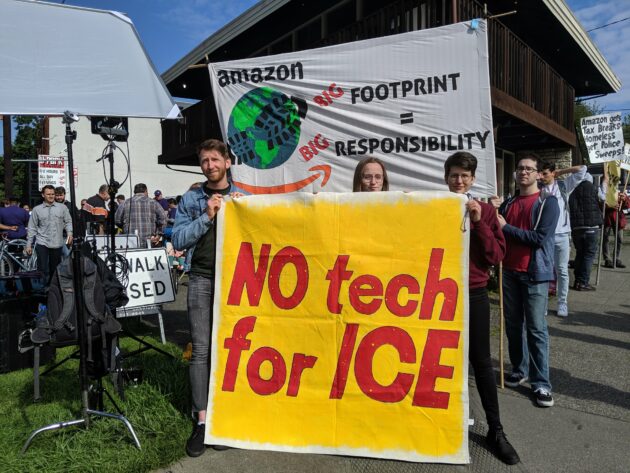 
Amazon has been on a wild ride over the last year.

The Seattle retail and tech giants profits and stock price have soared to record highs during the pandemic as the company hired an astounding 500,000 new workers last year, increased its already colossal warehouse capacity by 50% and usurped Boeing as Washington states largest employer.

Yet Amazon has come under fire during that same period over a heap of racial, gender, human rights, labor, environmental and economic issues and the companys shareholders have taken notice.

At Wednesdays shareholder meeting in Seattle, Amazons investors will propose more than a dozen initiatives that advocates say are aimed at making the company a more transparent and conscientious corporate citizen.

Amazons board of directors is fighting all of the measures, saying the company is already adequately addressing the issues raised in the proposals.

The shareholder resolutions are non-binding, but theyre a way for investors to build consensus around certain corporate policies and pressure a company to take action.

Similar proposals, also opposed by Amazons board, have been put forward during previous Amazon shareholder meetings. Each of them failed.

Still, Amazon has never faced a year quite like 2020.

During the past 18 months, shareholders note in this years proxy statement (resolutions start on page 23), the company has been besieged with allegations about the wellbeing of its warehouse workers, potential abuse of its facial recognition and surveillance technology, antitrust concerns, its treatment of women and minority employees and more.

In fact, shareholders have put forth a proposal this year that would effectively force Jeff Bezos out of the company he founded after he steps down as CEO in this years third quarter.

Bezos plans to remain chairman of Amazons board after he departs the CEOs office, but the proposal would require that the board be led by an independent director who has not previously served as an executive officer of the company.

Allowing board chairs who have also served as CEO weakens a corporations governance, which can harm shareholder value, shareholders said in the proxy statement.

The shareholders behind the proposal point out that Amazon has been increasingly at odds with its key constituencies, including small businesses, its warehouse workers and communities in which it operates.

Amazon said its spent $11.5 billion on COVID-related measures, including employee safety, even building its own COVID testing labs at a time when government testing efforts were faltering. But lawmakers and worker advocates have been skeptical.

The company, meanwhile, has faced allegations of high injury rates among its blue-collar employees.

Earlier this year, Amazon mounted a vigorous and successful campaign to defeat a union vote at one of its warehouses in Bessemer, Ala. The companys tactics during the unionization vote are now under review by federal officials.

Jennifer Bates, an Amazon warehouse employee in Bessemer, is expected to call on Amazon CEO Jeff Bezos Wednesday to appoint one of the companys hourly workers on the companys board of directors, according to Oxfam, the social justice and antipoverty organization.

In a statement, Oxfam accused Amazon of continuing dehumanizing working conditions in its logistics facilities, as well as anti-union activities.

Beyond Bessemer, Amazon has been hit with a string of gender and racial discrimination lawsuits filed by its corporate employees, including five suits that were filed last week.

The company has acknowledged that Black and other minorities make up far too little of its leadership and has pledged to diversify its top ranks. Black employees, meanwhile, have accused the company of hiring them into corporate jobs below their skill level and being slow to promote them.

In addition, Amazon Web Services and Amazons consumer products arm are beset with skepticism over how the companys technology is being used.

Amazon has, for now, banned sales of its facial recognition technology to law enforcement agencies, yet a coalition of shareholders are calling for audits of how government agencies, both here in the U.S. and abroad, may be abusing the technology to violate civil and human rights.

Shareholders are also calling for greater scrutiny of how law enforcement agencies make use of Amazons camera-equipped Ring doorbell, which connects to a social network where footage and messages can be shared between neighbors and authorities. Among the concerns is whether the product is being used to disproportionately aim suspicion at people of color.

Yet another group of shareholders are asking Amazon to account for plastic packaging that may end up in the worlds oceans.

These controversies and operating challenges may have resulted from Amazons rapid growth, but they threaten to damage our companys corporate reputation and financial performance, shareholders said in the proxy statement.

One group that wont get a hearing at Wednesdays shareholders meeting is Amazon Employees for Climate Justice (AECJ), which has pressured Amazon in the past to take more aggressive measures to curb climate change.

Jamie Kowalski, a former Amazon software development engineer who now leads AECJ, said the group proposed a resolution calling on Amazon to account for what Kowalski called the racist impact of its pollution.

Kowalski said Amazons warehouses are disproportionately located in geographic areas where minorities live. Vast fleets of big rigs hauling packages to and from those facilities each day contribute to poor air quality in those neighborhoods, the group says.

Kowalski said Amazon fought the inclusion of the proposed resolution in this years shareholder meeting and the Securities and Exchange Commission ruled it out on a technicality.

Obviously Amazon did not want to see shareholders vote on this proposal so its not going to be on the proxy ballot, he said.

AECJ made national headlines over the past year after Amazon fired two of its leaders, Emily Cunningham and Maren Costa. The National Labor Relations Board earlier this year ruled that Amazon illegally retaliated against the pair for their activism.

The Washington Post reported in January that Amazon also threatened to fire Kowalski, who told GeekWire hes since left the company to think about what whats next for his career.

In its proxy statement, Amazon lists a long roster of measures its taking to protect the environment, ensure its technology is used responsibly and equitably by governments and other customers and to ensure worker safety.

Those measures, the company said, include panels of experts closely monitoring how its facial recognition technology and other products are deployed, programs aimed at promoting minority employees and even the use of machine learning to reduce the use of plastic packaging in shipping materials.

Meanwhile, Amazon has throughout the last year announced programs to reduce workplace injuries and invest heavily in renewable energy.

The company has also touted its $15/hour starting wage for logistics workers, which is more than twice the federal minimum wage. The next Game of Thrones? Fantasy books heading for TV and movie screens Robotic lizards may play a role in the future of disaster surveillance, researchers imagine