Quicksave Interactive, a new game studio in Helsinki, has raised $1.3 million to make HTML5-based social games that can reach users on any platform.

These are light, short, and fun apps that you can play inside a messaging or chat platform, like Facebook Messenger or Viber. HTML5 is the lingua franca of the web, and it has improved in performance over time so that game developers can now make better games based on the technology. Games built on HTML5 can potentially run on the open web as well as they can on a native app.

And thats what drew CEO Elina Arponen and her cofounders, Ville-Kalle Arponen (creative director) and Timo Kmrinen (chief technology officer), to create a new game studio to take advantage of the opportunity. They had previously worked together in a PC-focused game company, Tribe Studios, which they sold to Palringo in 2015. They started Quicksave Interactive in 2017 to make both HTML5 games and game development tools.

We were thinking how we could take these kinds of games to mobile devices, Arponen said.

Their seed round was led by Konvoy Ventures, with participation from Sisu Game Ventures, Raptor Group, and Lago Innovation. The idea has grown more fashionable with time, particularly as game developers have soured on paying their 30% fees to app platforms such as Apples iOS and Googles Android.

In the past four years social apps have started to offer integrated HTML5 games. HTML5 games can be played directly inside your favorite social app like Facebook, Snapchat, WeChat, and others. The players dont have to install anything new on their phone and can play directly over the internet and invite their friends to join. They can also bypass the stores. This was one reason that rival Playco managed to raise $100 million to make social instant games.

The space has been gaining momentum almost unseen to a lot of the companies in the industry, Arponen said. It has been easy to dismiss because Facebook games already seemed to have their time a decade ago, and HTML5 was viewed as a kind of tech fad. But HTML5 combined with WebGL and modern smartphones offers a platform for high-quality game experiences on the same level as games downloaded from app stores, Quicksave believes.

Also, mobile networks are getting faster and the infrastructure needed for supporting an HTML5 game is much lighter than it is for the cloud streaming services.

This market also works differently from the games available earlier in the previous era of Facebook games. The games can get much better virality by using the messaging platforms on smartphones rather than desktops.

Quicksave views social games as part of the evolution of communication. We started with pure text, then emojis, images, animated GIFs, videos, and now games. How can games enhance and be part of the expression of what you want to communicate? Thats a question that Quicksave wants to answer.

The space is evolving toward games that have longer playtime and keep players engaged for longer times. The mobile game industry is already seeing games stay on top of a given platform for years.

User acquisition cost in the app stores continues to climb. Social apps offer a new way to reach out to players where its easier to develop built-in virality. The user acquisition cost also tends to be lower due to a shorter user acquisition funnel: When you see an ad in the same platform where the game is embedded, the user only has to click the ad once to go directly to the game.

And weve seen companies like Epic Games rebel against the 30% fees that platforms like Apple and Google take.

Im very interested, and I follow the news, Arponen said. Either way, this space is growing and its maturing. The quality is going up and the business models are starting to function well. It would be more interesting if certain things were more possible on iOS phones. Quality-wise, the games are very close to what you will find on a mobile app store, and they can have more social features available. 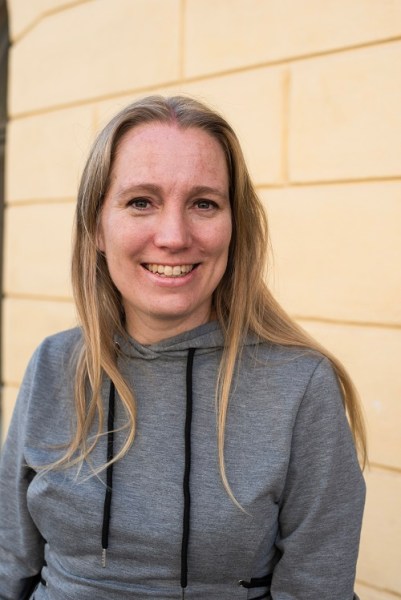 Above: Elina Arponen is the CEO of Quicksave Interactive.

HTML5 has a global reach, the capability to run on any platform, freedom for developers, and no platform fees. The appeal of the platform is a combination of all that, Arponen said.

Some of the things we find most exciting is the ability to be inside messaging, that we have integrated within the messaging, Arponen said. We see this as the next step up in communication. There are new design possibilities that come from that. You can achieve virality with social functions. Then user acquisition tends to be cheaper because the funnel is shorter. If you have an ad, in the same platform where the game is, and you just click the ad, then you go straight into the game. There is less friction.

She added, We can get around the friction if you are inside the app that people are already using on their phones. The distribution is so much easier. The content is so much more shareable. We get to start the game design from the point of view of the platform users.

To deal with the quirks of HTML5, Quicksave has been developing its own game development tools and editors to make up for this. It has been optimizing the speed of iteration as well as the amount of content and meta it is able to have in the games. Quicksave is reaching a point where the core development challenge is no longer the tech but instead the content and how to innovate the new era of social play.

We will have an office, and its still a small team, but being together will make it easier, Arponen said.

It also has a game on a Russian platform, as well as Facebook and Viber. Facebook is likely to be the biggest partner for the short term, she said. She said the company is considering Snapchat as well as WeChat, though it doesnt have games on those platforms yet. The 2022 BMW 4 Series Gran Coupe comes as no surprise