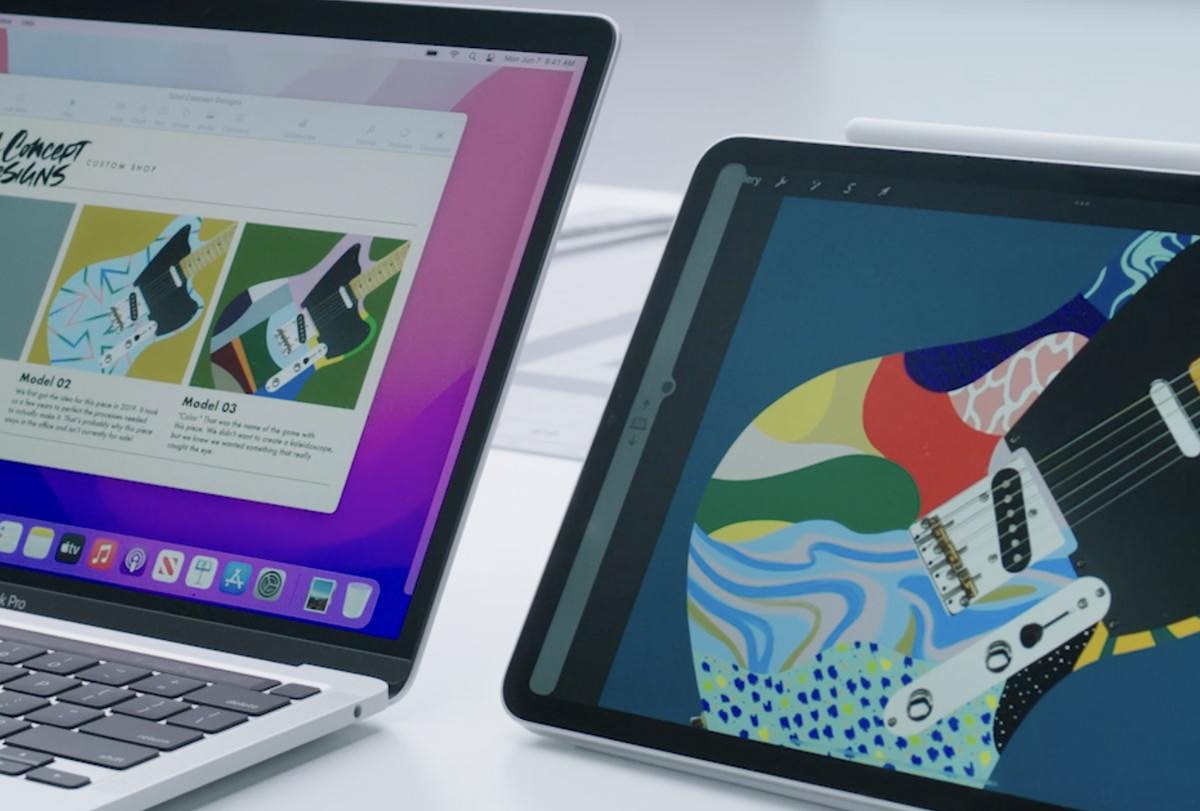 
The best moment of this years WWDC keynote was a straightforward demo of a macOS feature, Universal Control. The idea is simple enough: it allows you to use the keyboard and trackpad on a Mac to directly control an iPad, and even makes it simple to drag and drop content between those devices.

What made the demo so impressive is how easy and seamless it all seemed. In a classic Apple move, there was no setup required at all. The segment happened so fast that it even seemed (incorrectly, as it turns out) like the Mac was able to physically locate the iPad in space so it knew where to put the mouse pointer.

After Zaprudering the clip and asking Apple a few questions, I now have a better understanding of whats going on here. It turns out that the entire system is actually simpler than it first appears. Its essentially a new way to use a bunch of technologies Apple had already developed. Thats not a knock on Universal Control sometimes the best software features are a result of clever thinking instead of brute force technological improvements.

So heres whats happening in that demo.

First, you need to get the iPad and Mac relatively close to each other. Universal Control is built off the same Continuity and Handoff features that have long been a part of iOS and macOS. When the devices are close enough, their Bluetooth modules let each other know. Of course, all the devices here need to be on the same iCloud account for this to work.

Then, you start up Universal Control by dragging your mouse pointer all the way to the left or right edge of your Macs screen, then a little bit beyond that edge. When you do, the Mac will assume that youre trying to drag the mouse over to another device, in this case the iPad.

So theres no UWB location detection, just good old assumption. One note is that if you have lots of compatible devices, Monterey assumes that youre dragging towards the last iPad or Mac you interacted with.

At this point, a Wi-Fi Direct connection is made and the iPad will show a small bar on the side with a little bump. Its a sort of indicator that the iPad is aware youre trying to drag a mouse into it. Keep dragging and pow, the bump breaks free into a circular mouse pointer. When the mouse is on the iPad screen, both it and the keyboard on your Mac control the iPad. Move it back to the Mac, and you control the Mac.

But theres a clever little affordance built into that strange bar. There are a couple of arrows inside it, a hint that you can slide that bump up or down before it breaks free into the iPad itself. Doing that is how you line up the iPads screen with your Macs, so that dragging the mouse between the screens doesnt result in a weird jump.

You go through the same process to set up a second device with Universal Control it maxes out at three. If all this automatic setup sounds like a hassle, you can just go into system preferences and set a device as your preferred Universal Control buddy gadget.

However you set it up, you can drag and drop content between devices and itll use either Wi-Fi Direct or USB to transfer the files. Of course, if youre dragging files into the iPad, make sure you have an app open (like Files) that can accept it.

Thats pretty much the long and the short of it. There are still some details to hash out, Apple tells me, and it isnt available in the first developer preview. If you put your dock on the left or right edge of the screen, for example, its unclear if this whole setup will work.

Whats fascinating to me about this system as I discuss in the video above is that its only really possible because of a long series of software enhancements that have been built into the iPad over the years, including:

I had a hunch that there would be a similar story of evolution on the Mac side of this story. I figured that all the iPad and iOS technologies finding their way into the Mac with the last few releases played a part. Catalyst apps turned into native iPad apps for M1 Macs. Control Center, Shortcuts, and Focus mode all are iOS things that are also on the Mac.

Nice idea, but wrong. Apple tells me that the foundation on the Mac side is as simple as it seems, based on Continuity and Handoff.

I hope that Universal Control works as well in the real world as it did in this staged demo and I know thats no sure thing. But what I like about the feature is how its just a clever recombination of existing technologies that Apple had already built for other purposes.

Inside the Apple ecosystem, you expect that the trade youre making for only using Apple devices is getting synergistic integrations like this. Theyve actually been rarer than I would have guessed the past few years. But as the Mac and the iPad start trading more and more features with each other, I expect well see more of them going forward.