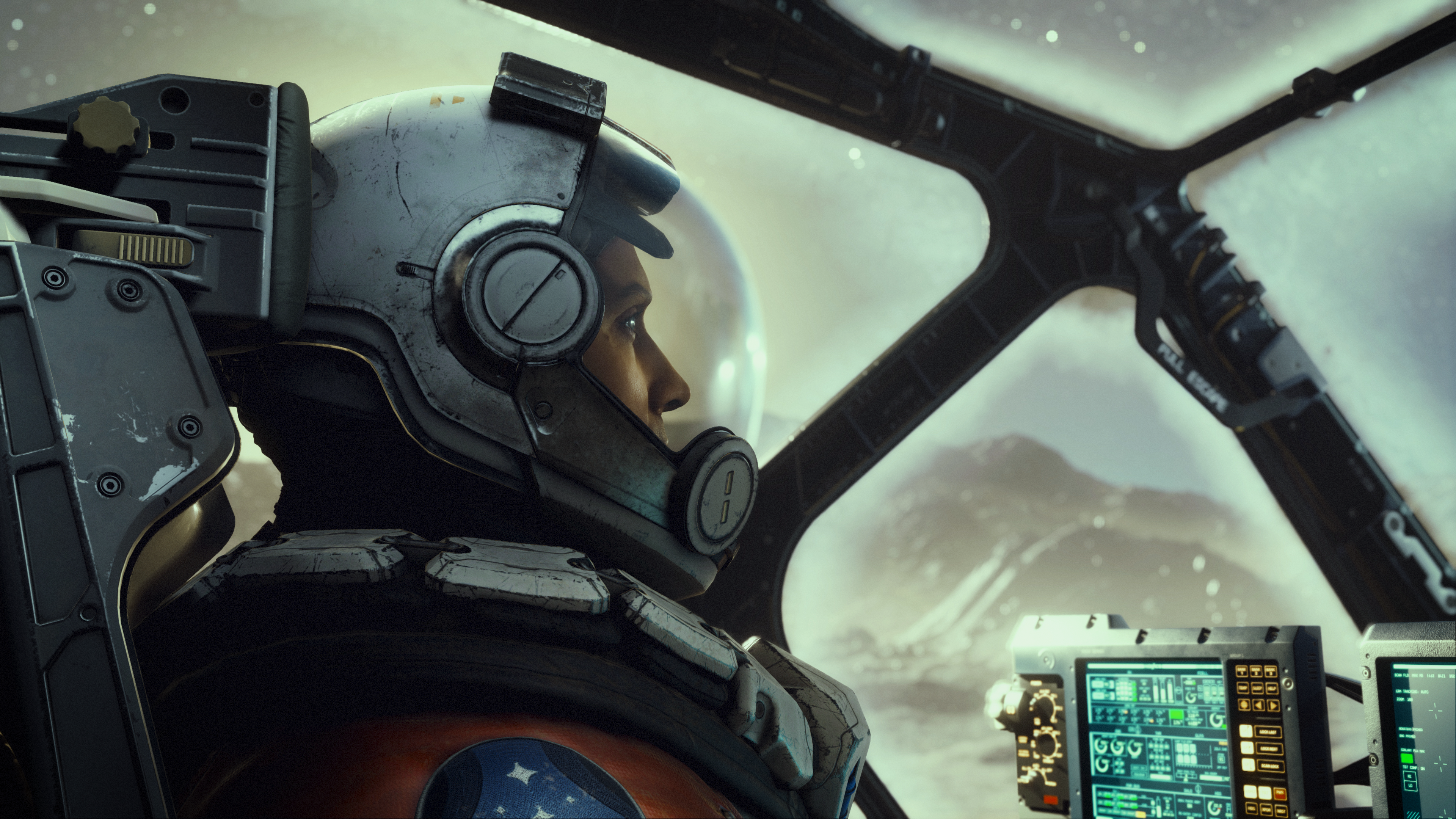 Thats how Bethesda Game Studios Executive Producer Todd Howard described the upcoming game Starfield in an exclusive video interview with The Washington Post. Starfield, in development since 2017, represents the first new IP in 25 years for Bethesda, the video game studio behind the critically acclaimed action role-playing series The Elder Scrolls and Fallout. The new space-based role-playing game will be released Nov. 11 of 2022 for PC and Xbox Series X and S.

Because of major technological leaps since Skyrim, the last Elder Scrolls installment from 2011, Howard said Starfield will be much more robust than that title, which won numerous game of the year awards. The first video footage of Starfield, which kicked off the Microsoft/Bethesda joint presentation during the Electronic Entertainment Expo (E3) Sunday, shows a fraction of the breadth of this brand new universe. How big could it get? Bethesda Managing Director Ashley Cheng compares the game to Star Wars.

For me, Starfield is the Han Solo simulator. Get in a ship, explore the galaxy, do fun stuff, said Cheng, whos been with the company for 21 years.

Like so many Bethesda trailers, there are hints at the studios inspirations throughout the games reveal video. The beat-up starship, Frontier, and the many control buttons within emit a Fallout vibe. Howard said the choppy black and white beginning is an homage to NASAs first moon landing on July 20, 1969, incidentally the same day Howards brother was born.

Keen interest in NASA was always part of Howards life, a fascination that inspired him and his family to visit Cape Canaveral during the height of the space program. Then growing up in the 70s with Star Wars, Star Trek, Battlestar Gallactica… I took a great interest in it for a long time, Howard said.

For me, Starfield is the Han Solo simulator. Get in a ship, explore the galaxy, do fun stuff.

According to Howard, in Starfield players will join an organization dubbed Constellation, the last group of space explorers. At the outset, players will choose their characters background, with many options for customization that will impact how some things in the game unfold.

[Pely] knows what all the buttons do on the ships. Even though its science fiction, your mind can sort of draw the line all the way back [to NASA],” Howard elaborated. “It all should feel lived in, even for a ship. The environment in the ship isnt fancy, as demonstrated by the curiously packaged Chunks, a kind of MRE, displayed in one of the trailer scenes. Howard said its contents were a mix of processed space food, probably primarily potato.

In addition to being the next major RPG for Bethesda, the game figures to be one of the first major must-play games for Xbox since Microsoft acquired Bethesdas parent company, ZeniMax Media, for $7.5 billion earlier this year. In a wide-ranging, hour-long interview, Howard and Cheng spoke about the merger, how Bethesdas employees operated through the pandemic, the difficult-to-process death of ZeniMax founder Robert A. Altman, and whether the release date may still move for the companys first new game over a decade.

In Starfield players will join an organization dubbed Constellation, the last group of space explorers. (Bethesda)

During the interview, Howard sat at home in front of cherry wood bookshelves bearing a figurine of Fallouts iconic Pip-Boy and an Indiana Jones idol and ark. (Bethesda and Lucasfilm announced they were working a new Indiana Jones game in January.) In his answers, Howard was thoughtful, descriptive and at times, effusive. But with the space exploration RPG still 18 months away, Howard didnt want to reveal all of the particulars. When asked about a plant growing in the background of a spaceship shown in the trailer, he demurred. Obviously, today I dont want to spoil too many things.

The massive amount of things that are included in the game are stored in an internal Wiki at Bethesda, a library of all things Starfield to which many of the 450 employees who work on the project have access. These include histories, backstories, starship architecture, pretty much anything a fan (or an employee) would geek out about.

The initial idea for Starfield may well have begun when Howard was a teen trying to make games on his Apple II computer. He got as far as creating characters and a title screen for his own interplanetary game when the computer ran out of memory.

According to Todd Howard, “Starfield” is “like ‘Skyrim’ in space.”

LEFT: “Starfield” concept art. RIGHT: According to Todd Howard, “Starfield” is “like ‘Skyrim’ in space.”

Bethesda has created space-oriented fiction at various times during its existence, Howard recalled. Believe it or not, Bethesda long ago had the rights to Traveler, when I first started in [19]94. They quickly went away, he said. Theres a game we put out called XCar: Experimental Racing that was part of this Traveler game. It ended up not really going anywhere. There was going to be a space game called The 10th Planet in 1997. We actually had the Star Trek rights at one point and made some games [in the 2000s]. I pitched a Star Trek RPG at the time, which obviously we didnt do.

Howard remembered when Morrowind” was popular and Bethesda was looking at next big things, he really wanted to do “post-apocalyptic, and thats when we were able to acquire Fallout [from Interplay]. A purely science-fiction game like Starfield took longer to come about, Howard said, because of the technical resources it demanded.

Weve known for a while that if and when we do something else, it would be science fiction, Howard said.

Starfield effectively germinated a few years before the name was trademarked in September 2013. There were no other names [we considered], Howard said. “It had to be Starfield.’

Cheng said the studio now has a renewed vitality due to Starfield. I love Fallout, he said. But after seven years of Fallout, its a little nice to slip away to be working on something so new and fresh.

As the just-premiered trailer states, the game covers the beginning of humanitys final journey.

We struggled at first at finding Starfields identity,” Howard said. “We knew the style of game we wanted. But theres so much science fiction, we didnt have this exciting franchise feel. We had to create that from scratch. What do the spaceships look like? Whats the tech level? What do people believe? What year is it really set in?

A detailed timeline was created that included the history of what happens every decade and it was decided that the game would take place 300-ish years in the future,” Howard said. “And now man is living amongst the stars: what does that mean?

To help in the journey, there are a variety of robots. While there is nothing like Star Warss C3PO, Howard said there is one named Vasco (a nod to explorer Vasco da Gama) who is admonished (via a crew members wall scrawl) in the trailer because the robot forgot to procure a beverage called Tranquilitea. That name is yet another nod to NASA: Tranquility Base was the moon site on which the Apollo 11 astronauts first landed and walked.

A second Starfield video, narrated by Howard and premiered on The Washington Post, titled Into the Starfield: The Journey Begins, features Bethesdas employees toiling away on the new title. While the production promotes the familiar idea of teams happily consumed in their novel work, its also a showcase for creativity and artistry. In one scene, Mike Butkus, the well-known graphic artist who did posters for films Ready Player One and Django Unchained, carefully airbrushes a character sketch by hand.

It speaks to some romanticism about how [Starfield] feels, Howard said. Starfield is the first new IP in 25 years for Bethesda, the studio behind series The Elder Scrolls and Fallout. (Bethesda)

It has not been easy making a super expansive game during a pandemic.

When covid hit, it literally didnt matter where you sat,” Cheng said. “We sent everybody home, and we were 450 plus studios [with people working from home], not just four.

The past year-and-a-half was further marred when ZeniMax founder Robert A. Altman suddenly died in February of 2021. Sadness reverberated throughout the company, just like the shockwaves sent by one of Altmans final achievements. While talks had taken place on and off for years, Altman had been instrumental in the sale of ZeniMax and its subsidiaries to Microsoft for $7.5 billion. He drove the deal, Howard said.

Its still difficult for Howard or Cheng to talk about Altmans passing, and both took a moment to collect their thoughts. After pausing, Howard said, Its hard to express I dont think I ever really will in a way people can appreciate what he meant to everybody. He and I were very close for a long time.

[Robert A. Altman, who went from bank president to video game company CEO, dies at 73]

Cheng recalled Altmans guiding presence. He was a great role model and a great leader,” Cheng said. “I was heartbroken that he wasnt there for the culmination [of the Microsoft deal]. He will be missed. He was a great man. I learned a lot from him just about how to really trust your employees.

Despite the challenges Bethesda has faced primarily the pandemic, which has delayed numerous highly-anticipated games over the past 15 months Howard firmly believes Starfield will meet its just-announced release date of November 11, 2022.

Were confident in the date,” Howard said. “Otherwise, we wouldnt be announcing it.

A purely science-fiction game like Starfield took longer to come about, Howard said, because of the technical resources it demanded.

What comes next? A companion mini-game like Fallout Shelter is unlikely, according to Howard, but Bethesda is not ruling out a movie or TV series in the future. Bethesda is currently developing a Fallout TV show with Westworld” producers Jonathan Nolan and Lisa Joy for Amazon Prime Video.

Its a great world to put a show in, Howard said. “We took a good decade on Fallout, looking, listening to lots of takes and pitches. I think its about finding the right creative team. A lot of people want to do The Elder Scrolls as well, but thats not something were doing right now.

Exploring various possibilities brings Howard and Cheng back to their upcoming sci-fi RPG.

This is going to sound cliche, but I mean it,” Howard said. “When you look up in the sky, there is this drive to know, what is out there? Are we alone? What are the origins of space and time and all of those things? What role does religion play in some of that as well? So, we do get into some big questions. I think a game like this is a good place to do that.

“There are movies and books that have done it as well, but we havent seen a game do it in this way. And well see how successful well be. An antidote to boring e-commerce

39 best films to see on Netflix