EA showed off Madden NFL 22 for the first time this week during a press briefing, and one of its most intriguing aspects will be its deeper integration with the leagues Next Gen Stats to improve the long-running sims AI.

Next Gen Stats is a division of the NFL thats a partnership with Zebra Technologies and Wilson Sporting Goods. It uses radio-frequency identification tabs (RFIDs) on the players shoulder pads and the ball, cameras posted around stadiums, and other tech to not just get stats were used to like Yards After the Catch (YAC) but telemetry that, as Next Gens website says, captures player data such as location, speed, distance traveled and acceleration at a rate of 10 times per second, and charts individual movements within inches.

Madden NFL studio EA Tiburon integrated Next Gen Stats for the first time with last years game, coinciding with the launch of the PlayStation 5 and Xbox Series X/S. Creative director Connor Dougan dived into what this meant for Madden and why Tiburon added Next Gen Stats.

We had an opportunity to do something pretty cool from a gameplay perspective, we wanted to kind of go back to our roots which is you know authentic simulation football, Dougan said on a video call. So we have all this data from every play for the last six years, and theres a whole bunch of cool use cases for it. So our first use case we move to Gen 5 [PS5/Xbox X/S], we have all this extra horsepower, animation, memory. What can we do to make our movement more authentic? So we took our real NFL player movement past to drive our underlying player movement engine.

The AI already uses Next Gen stats to improve how Madden sims route-running speeds and acceleration values, Dougan said, so we felt our next evolution was on the AI, so they have all these interesting and cool stats that [Next Gen Stats] tracks. How good is a quarterback under pressure? What is their average time to throw? How good are they scrambling a pocket? Theres literally like hundreds of different stat, and we wanted to use this data to help inform our AI and drive our AI to make them that much more intelligent, much more authentic.

How does it work

Curious about how this Next Gen Stats integration worked last year, as a way to better understand the improvements coming to AI this year, I asked if Tiburon was attempting to better capture Baltimore Ravens quarterback Lamar Jacksons tendencies for not just how he scrambles out of the pocket, but the rates at which he runs and the paths he tends to favor.

So for last year, it was more using that to authenticate, how they move, how fast they accelerate, [not] necessarily where they go and when they go. And we also took a route verbatim so if you had [Kansas City Chiefs wide receiver] Tyreek Hills post route, we could take that exact route imported into our game and have the virtual Tyreek Hill on that, Dougan said. So now this year is much more about decision-making. And its such a cool amount of interesting data that we can use to inform and drive, not only our player movement but also our AI.

Madden NFL 22 will have improvements to catching, tackling, and blocking.Tiburon uses Next Gen Stats for player movement and tendencies, Madden designer Clint Oldenburg said in a clarification email. So that data will have an indirect impact on the types of interactions that play out based on the speed, acceleration, and momentum of the players entering the interaction, Oldenburg said. But we are not using Next Gen Stats in our ratings system right now, thus it will not impact the outcome of the play.

As for blocking, Oldenburg said, Were not using robust Next Gen Stats data in the blocking space quite yet, but it could have an indirect impact based on the movement of the players.

Above: Maybe NFL Next Gen Stats will be able to figure out how Tom Brady is still playing Super Bowl-caliber football at the age of 43.

While Dougan said EA Tiburon does have some data scientists helping make sense of all this information, the heavy lifting comes from Next Gen Stats end, making it a real partnership, not just funneling numbers from the NFL spigot into Maddens databases. (Or, you know, just adding legs to a Madden Thanksgiving game turducken.)

By using these stats and matching them with machine learning from EA player tendencies, Madden becomes even more of an alternate universe for the What If? NFL crowd, with an amazing set of data that comes from the integration of real stats and how players use it.

Theres millions and millions of Madden players, and when you think about it, something weve always wanted to do is, lets say you and I were playing against each other. How cool would it be for me to see a scouting report of you, your tendencies, your behaviors, what you like to do, Dougan said. Longer term down the road, getting full video and scouting reports, so I could scout you before I play I mean, I can see a world where its all its on a completely different level in terms of like analytics, statistics, and then scouting.

This comes into play with the new Scouting Report feature. The presentation focused on how this works with scouting colleges players. I asked Dougan if would apply to scouting reports ahead of a game as well, giving you info about your next opponent. And you can use these for halftime adjustments as well (a new feature).

From a Franchise perspective, they will work that way so you will be tracking what players like to do on 1st down, 1st-and-long, 3rd down, 3rd-and-long all these different game situations, Dougan said. So if youre playing in a Connected Franchise, so lets say were playing together. And we have a Week 12 matchup, Im going to be able to understand what your play-calling tendencies are, and then Ill be able to pick a game plan accordingly.

Dougan gives an example: So lets say you really like to run outside, for whatever reason. I can infer that from the stats that Im going to see in my scouting report in Franchise, and then pick the appropriate game plan to hopefully get an edge on you. And then if that doesnt work, you decide to switch it up, I can again adjust at halftime.

Next Gen Stats wont be streaming into your Madden games every week at the beginning of the season. During a Q&A after the presentation, Oldenburg said that the team would first add updated Next Gen Stats a few weeks into the 2021 NFL season in a title update. But the goal is to speed this up, getting to weekly title updates. Dougan says the team does have some concerns that factors into the slow rollout.

We just want to be careful for statistical outliers. So if we get, for whatever reason, some quarterback all of a sudden changes his behavior completely, and it could be that theres like three or four turnovers in the first quarter, so their game plan is completely changed, Dougan said. So we just want to ensure that you know the statistical thresholds that we hit to change the players tendency is as accurate as it can be, because if we just automated it, theres a little bit of nuance to sort of the data, from game-to-game, and we just dont want to change it too early. Thats our main concern.

I asked how this process would affect the case of players like Buffalo Bills quarterback, who over the course of two seasons became a different (and much improved) player. [Of course, now I wish Id asked this about Carolina Panthers QB Sam Darnold Ed.]

I think that will be a little bit easier, because were going to have the Next Gen Stats data on them. But then thats really kind of the difference between the nuance between a tendency and a rating, right? Dougan said. A tendency is what were looking at, is like his propensity to buy time in the pocket, or scramble outside of the pocket to throw, or scramble to run. And thats how we can get their successes is kind of the next factor on top of it. Its sort of the second piece on top of it, and thats more ratings driven.

But from a tendency standpoint, were just going to have to ensure that we get enough data before we make the switch, thats all. 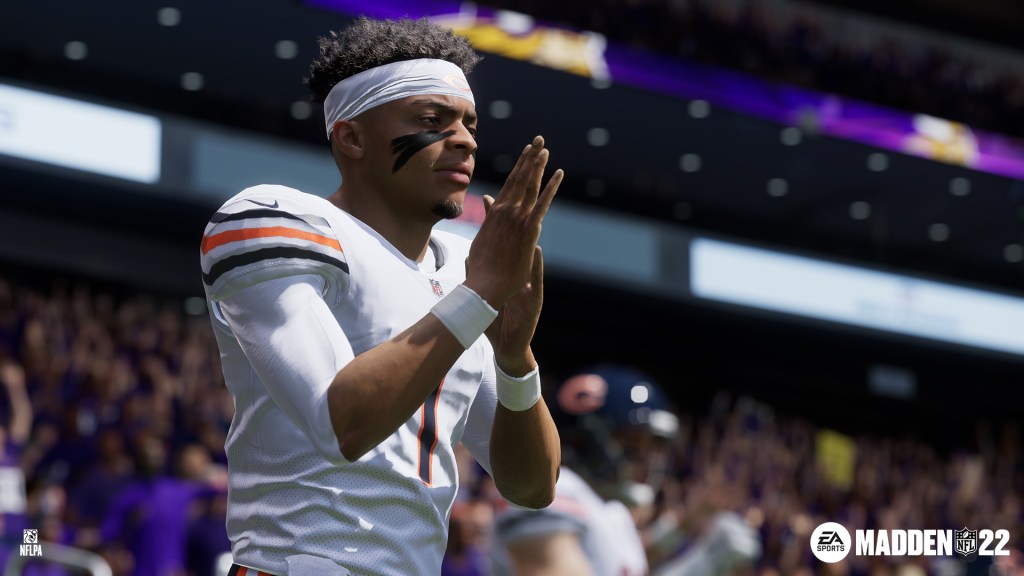 Above: Its going to take Madden NFL 22 some time to get some useable Next Gen Stats on Chicago Bears rookie QB, Justin Fields.

For rookies, who have no Next Gen Stats datasets, theyll start with traits and get updates based on what comes in from the NFL.

A taste of home

Being a San Francisco Bay Area sports fans, I still feel a bit of affinity for the Las Vegas Raiders. This year, Madden NFL is factoring homefield advantages and momentum into gameplay. The 12th Mans noise plays a role at Seattle, attitude factors into games at Denver, and in Chicago, its going to be harder to kick. Its an extension of the X-Factor system from Madden 20. In a follow-up question over email, I wondered why EA Tiburon is adding this now.

Why not now? Dougan said over email. Players told us then they desired an emotional connection to the Superstars of the NFL and wanted them to feel unique on the sticks. Since then, theyve told us that they also want to feel an emotional connection to their favorite teams environments, fan bases, fandom, etc., as they crave this affiliation inside of Madden. We believe this feature will do for the NFL atmosphere was X-Factors did for NFL players to meet the desires of [Madden] players.

But the Raiders new indoor stadium didnt have fans last year because of the pandemic, so you cant tailor any advantages to the crowd. And we dont know if The Black Hole will be anywhere near as raucous in Vegas as at Oakland, as some longtime fans cant afford travel or tickets at the Raiders new home.

What has Tiburon brewed up for the Raiders? The advantage is a fitting one: We have a one that is called Just Win, Baby. While winning, you have an increased momentum ability to gain momentum and fatigue recovery. And really, thats just made to honor the Al Davis team motto and reflect, you know, his burning desire to bring home the win for the fans.

EA Tiburon hopes that Next Gen Stats deeper integration will bring home a win for fans and EA as will.